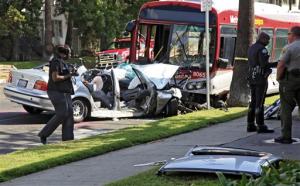 LOS ANGELES (AP) – An untended dump truck rolled down a Hollywood street Tuesday and smashed into a commuter bus, which then collided head-on with a car and left 27 people injured, authorities said.

The Metropolitan Transportation Authority bus carrying 25 people was westbound on Hollywood Boulevard shortly before 8 a.m. when the truck T-boned it, creasing the metal side and shattering windows, authorities said.

In trying to avoid it, the bus veered into eastbound lanes and collided with a sedan driven by a woman taking her 10-year-old daughter to school, city Fire Department spokesman Brian Humphrey said.

“It actually pushed the sedan back a distance. It was a forceful collision,” Humphrey said.

The front of the car was wedged under the bus. Some bus passengers escaped through emergency windows but the woman in the sedan was trapped and had to be cut free by firefighters, Humphrey said.

The bus driver was hospitalized in fair condition and all the passengers on the bus were taken to hospitals for treatment of minor bumps, bruises and cuts from shattered window glass, Humphrey said.