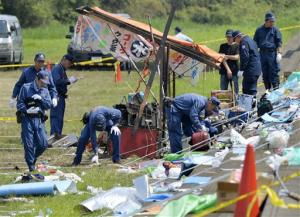 KYOTO – A total of 59 people were injured Thursday evening after an explosion at a row of stalls at a summer firework festival in Kyoto Prefecture, firefighters and police said Friday.

Eighteen of the victims suffered major burns and other serious injuries, including a 13-year-old boy, who remains unconscious at a hospital in the city of Toyooka, Hyogo Prefecture, and a 10-year-old boy, who is being treated in the intensive care unit at a separate hospital.

The blast occurred at around 7:30 p.m. Thursday just before the start of the firework display in the main viewing area on the bank of the Yura River in Fukuchiyama, Kyoto Prefecture, across from the firework launch site, according to the authorities.

The injured were aged between 3 and 85, they said.

Police sources said the blast was believed to have been caused by one of the stall operators at the fireworks site putting gasoline into an electricity generator without switching it off.

The police plan to question the stall operator, who was injured in the blast and taken to hospital, on suspicion of professional negligence that resulted in injuries, the sources said.

The annual festival, which last year drew around 110,000 spectators was canceled immediately.

The local chamber of commerce, which organized the festival, said propane gas cylinders used at the stalls may have exploded. Local residents said they heard more than one explosion.

Firefighters said three stalls caught fire and collapsed. They were among the around 350 stalls selling foods and goods at the festival venue, they said.

“I heard a bang and then saw a billow of smoke,” said a 37-year-old man from the chamber of commerce, who was serving as a volunteer around 200 meters away from the site of the blast.

A 28-year-old woman from Ritto, Shiga Prefecture, said, “It was a mess with blue sheets used by festival goers scattered at the viewing site, drawing a crowd of curious people while other people were leaving the venue.”

About 6,000 fireworks were scheduled to be let off during the 90-minute festival, according to the official website of the event.