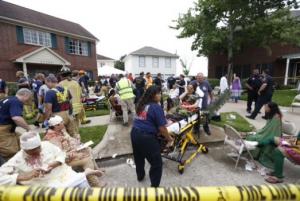 KATY, Texas (Houston Chronicle) – Some 30 people were injured Thursday afternoon when the second story of a garage collapsed in the middle of a party. The crowd of as many as 150 people gathered for the festivities on Park Mill Drive in Katy, Texas.

Neighbors and attendants gathered on the sidewalks as 15 ambulances from the West I-10 fire department treated the injuries. Tim Thomas, public information officer for the fire department, said crews were seeing cuts, abrasions and was injuries but that of the 36 people taken to area hospitals, three were considered urgent.

Houston fire department also responded to the scene with its mass casualty evacuation ambulance, designed to transport up to nine people on stretchers.

Senior captain Luzano Ruy described the inside of the garage structure as “pancaked.”

“The floor gave way,” he said. “It looked like it bowed.”

Attendants at the party refused comment. Neighbors Jill and Blake Allred said they rushed from their home a block over when they heard ambulances shortly after 1 PM. “It’s crazy,” said Jill Allred,” we can’t get in or out of our neighborhood.” Her husband added, “When we first got here, everybody was running around, asking neighbors for ice and water.”

Yesterday afternoon, residents of Park Mill Drive learned about the family’s plan to throw a party when the son went door to door delivering a letter explaining what to expect. Leticia Sahagan-Rubio, who lives across the street from the house where the collapse occurred. “It was such a nice letter,” she said. “I feel bad,” she added, “they don’t deserve this.”

“This is the only party they’ve ever had,” said Sahagan-Rubio who has lived on the street off and on for 15 years. She said the party was a religious ceremony with a reception to be held elsewhere in the area. In the collapse, oils spilled on some of the attendants, marking many of the men’s white outfits in yellow and red.

The response was large, according to Sahagan-Rubio. “It was just a stream of ambulances.” She said people of all ages, including toddlers and elderly came from the house. Her neighbor from down the street Linda Rossman added, “I saw family members carrying each other out.”