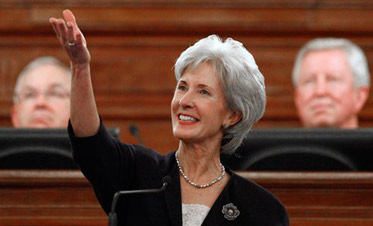 WASHINGTON — Kansas Gov. Kathleen Sebelius, the president’s choice for health and human services secretary, will face a host of challenges in her new job, including a health system in disarray and a nation’s food supply at risk.

Obama will introduce Sebelius on Monday afternoon in the White House East Room. The announcement of his health and human services secretary nominee comes just days before the president holds a White House summit on health care. Lawmakers from both parties and representatives of major interest groups, from insurers to drug companies to consumers, will attend.

Gaining their support – as well as winning confirmation – are among the 60-year-old governor’s first challenges. A vast bureaucracy that handles everything from Medicare to cancer research to food safety awaits her. She will also be a very public face for Obama’s plans for health care, although a White House-based counterpart will handle many of the new policy moves.

Originally, the president had counted on former Senate Majority Leader Tom Daschle to shepherd his health overhaul agenda through Congress. Daschle would have worn two hats: health secretary and head of a White House health reform office. He was on a first-name basis with many in the Senate, where health care legislation faces its stiffest test.

But Daschle withdrew his nomination after disclosing he had tax problems. That left the new administration scrambling to find a substitute secretary.

The recession has taken its toll on Medicare, which provides health care for older people and the disabled. Plunging tax revenues have weakened the program’s giant hospital fund, accelerating its projected insolvency to as early as 2016. That is only about five years after the first baby boomers will start signing up for services.

The Food and Drug Administration, meanwhile, is reeling from a seemingly endless series of safety lapses.

Sebelius is seen as a steady hand and an experienced public official who knows how to work across political lines. But she represents Obama’s backup plan.

Sebelius knows some of the key players, but will have to establish a working relationship with others. Obama plans to name a different person for the White House health care job, raising the possibility of tension between that office and the health secretary’s.

Obama made his opening move on a health care overhaul last week: his speech to Congress and a budget that set aside $634 billion over 10 years as a down payment on coverage for all. It’s a goal that could ultimately cost $1 trillion or more.

Obama wants to expand coverage while slowing the rate of increase in costs. Administration officials say they hope that will lead to a more affordable system, without the coverage gaps that leave an estimated 48 million people uninsured.