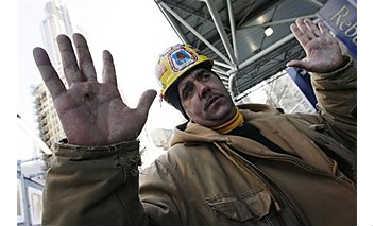 NEW YORK – A settlement that could pay up to $657.5 million to more than 10,000 ground zero rescue and recovery workers sickened by dust from the destroyed World Trade Center goes before a judge Friday, and he has said he favored a settlement but planned to analyze it carefully to make sure it was fair.

Mayor Michael Bloomberg called the proposal “fair and reasonable,” a sentiment echoed by one of the negotiators of the deal that was announced Thursday night after years of fighting in court.

The settlement agreed upon by lawyers representing the city, construction companies and the workers was announced by WTC Captive Insurance Co., a special entity established to indemnify the city and its contractors against potential legal action as they moved to clean up the site after the Sept. 11, 2001, terrorist attacks.

Both sides were scheduled to appear before the federal judge handling the litigation, U.S. District Judge Alvin Hellerstein, who must approve the deal along with the workers themselves. For the settlement to be enforced, 95 percent of the workers would need to agree to be bound by its terms.

The settlement would mean a postponement or cancellation of the trials tentatively scheduled to begin in May. Some of the cases scheduled to be heard first included that of a firefighter who died of throat cancer and another who needed a lung transplant, as well as workers with less serious ailments, including a Consolidated Edison utility company employee with limited exposure to the debris pile and no current serious illness.

The deal would make the city and other companies represented by the insurer liable for a minimum of $575 million, with more money available to the sick if certain conditions are met.

Most if not all of the money would come out of a $1 billion grant from the Federal Emergency Management Agency.

Marc Bern, a senior partner with the law firm Worby, Groner, Edelman & Napoli, Bern LLP, which negotiated the deal, said it was “a good settlement.”

Workers who wish to participate in the settlement would need to prove they had been at the World Trade Center site or other facilities that handled debris. They also would have to turn over medical records and provide other information aimed at weeding out fraudulent or dubious claims.

Thousands of police officers, firefighters and construction workers who put in time at the 16-acre site in lower Manhattan had filed lawsuits against the city, claiming it sent them to ground zero without proper protective equipment.

Many now claim to have fallen ill. A majority complained of a respiratory problem similar to asthma, but the suits also sought damages for hundreds of other types of ailments, including cancer.

Lawyers for the city claimed it did its best to get respiratory equipment to everyone who needed it. They also had challenged some of the claims as based on the thinnest of medical evidence, noting that thousands of the people suing suffered from conditions common in the general population or from no illness at all.

Under the settlement, the task of deciding what each worker will be paid will fall to a neutral third party, to be picked by the two sides. Some workers are likely to receive payments of only a few thousand dollars. Others could be in line to get more than $1 million, depending on their injuries.

Carpenter James Nolan, of Yonkers, said he helped recover bodies and build ramps for firehoses at the site and then developed lung and leg problems, for which he takes six medications. He said the city knew the air was dirty so he sued six years ago and now he’s happy the case is ending.