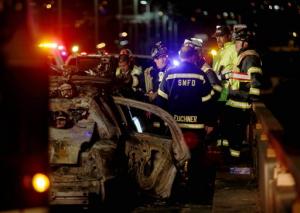 OAKLAND, Calif. (AP) – From the privacy of their bedrooms to the public bustle of busy hospital wards, families and friends are struggling with the heartbreak of losing five loved ones, all nurses, killed Saturday in a burning limousine.

Outside the Fruitvale HealthCare Center in Oakland, the medical center where all nine met and became fast friends, nurse Medhanit Kahassai ran sobbing out the door into the parking lot on Tuesday, overwhelmed with grief as flowers piled up in their break room.

“It’s hard today,” she said. “I thought it would get better today. It’s not.”

Dozens of “rest in peace” and “heartfelt condolences” messages poured into the women’s Facebook sites.

Four passengers and driver Orville Brown survived Saturday night’s deadly inferno that erupted as the women headed into San Francisco to celebrate the nuptials of Neriza Fojas, who died in the blaze.

The cause of the fire, captured on camera as a blast of flames at the back of the white stretch limo, is under investigation.

Fojas, 31, and another victim Michelle Estrera, 35, were both nurses at Community Regional Medical Center in Fresno.

Victims Jennifer Balon, 39, a mother of two, and Anna Alcantara, 46, both worked at Fruitvale, while Felomina Geronga, 43, also a mother of two, had been working at Kaiser Permanente Medical Center in Oakland.

John Balon told the San Francisco Chronicle that their 10-year-old daughter, Jillian, cries for her mother at night and is working on paintings to give her for Mother’s Day. She and her 1-year-old brother are still looking for their mother, he said.

He told his daughter that she is in heaven.

“I told her mom doesn’t want us to worry a lot,” he told the Chronicle. “She is happy there. She won’t be happy if we worry.”

Jennifer Balon’s Facebook page reflects her love for her children, with photo after photo of them playing, laughing and hugging.

Condolences from around the world have poured in.

“Jen, things will never be the same again. We are so devastated that we lost you this soon,” wrote her friend Willen Berdos, also an East Bay nurse.

Three survivors remain in the hospital: Jasmine Desguia, 34, of San Jose; Mary Guardiano, 42, of Alameda; and Amalia Loyola, 48, of San Leandro. Nelia Arellano, 36, of Oakland, was treated and released.

The four survivors managed to squeeze through the partition after the driver pulled over and climbed out. The women killed were found pressed up against the partition.

Several of Fruitvale’s chief staffers paid a somber visit Tuesday to the home of Arellano. She and her visitors declined to speak after their meeting.

Mourning was not limited to those who knew the victims.

“In our hospital, we didn’t know these women, but all of us Filipino nurses who work together are very affected by this,” Amy Johnson of San Jose said. “It touches all of us very much. Someone lost a mother, a sister, a daughter, that affects everybody.”

The Associated Press News Information Research Center and writers Sudhin Thanawala and Garance Burke in San Francisco and Gosia Wozniacka in Fresno contributed to this report.