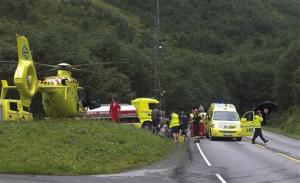 OSLO, Norway (AP) – A truck caught fire in Norway’s second-longest tunnel Monday, leading to the evacuation of 160 people – 55 of whom were hospitalized due to smoke inhalation and other injuries.

Rescue services spokesman Reinardt Sorensen said the light went out in the tunnel after the fire. Most of the injured suffered from smoke inhalation, but some people were lightly hurt after they crashed their cars in the darkness, he said.

The 160 people evacuated from the tunnel included the truck driver, who walked away uninjured, Sorensen said. He added that it wasn’t yet clear what caused the fire, which was extinguished.