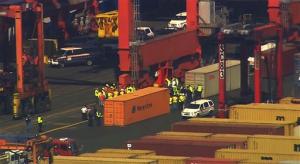 NEWARK, N.J. (AP) – An extensive cargo ship search that was triggered by a knocking sound ended Thursday without authorities finding any stowaways.

Federal authorities used X-ray machines, K-9 units and officers to search more than 160 of the 2,000 containers aboard the 850-foot Ville D’Aquarius at Port Newark, one of the nation’s busiest ports.

When the vessel arrived from the Mideast early Wednesday, it was met by law enforcement officials and more than a dozen ambulances. Large mechanical cranes began unloading containers from the ship.

The source of the noise remained a mystery.

“After a lengthy and exhaustive inspection by Department of Homeland Security officials, the search for stowaways aboard the Ville D’Aquarius has concluded with no stowaways found,” the department said in a statement Thursday morning following a search that lasted through the night.

A Coast Guard team had boarded the ship outside New York Harbor early Wednesday as the ship prepared to dock, spokesman Charles Rowe said. The officers were knocking on a bulkhead, or partition, of the ship as a routine security check and heard knocks back, he said, but they couldn’t pinpoint the source of the sound. The return knocks ended after about two hours, Rowe said.

The team followed protocol and didn’t open containers at sea in order to control the situation, he said.

The steel shipping containers are usually 8 feet wide and 8- to 10-feet high and either 20- or 40-feet long, designed to withstand the rigors of the high seas and are strong enough to be stacked several high.

They normally can be opened only from the outside. There’s hardly any ventilation.

Rowe said it took about eight minutes to check each container – unloading it off the ship, opening it up and X-raying it if necessary.

The manifest of the suspected container said it was carrying machine parts to Norfolk, Va., and was loaded in India, Rowe said.

The ship began its voyage May 30 in the United Arab Emirates, then made one stop in Pakistan and two stops in India. Its last port before Newark was in Egypt on June 15.

“The routing of the ship and the ports of call was what led to the actions,” McLees said.

Michael Ward, the FBI’s top official in New Jersey, said the response was appropriate given the port’s vulnerability. The area is considered a prime potential target for terrorists.

“You’re going to get a response like this any time you have these types of facts,” Ward said. “It was an appropriate response which we did out of an abundance of caution.”

Shipping companies are legally responsible for keeping stowaways off their vessels, said Frank Atcheson, a maritime lawyer based in North Bergen, N.J. When stowaways are found, the companies are liable not only for fines but also must pay to house the stowaways where they are found and for secure transportation back to where they originated.

Between January 1998 and Dec. 16, 2011, more than 13,000 stowaways were found in more than 4,000 incidents around the world, according to the International Maritime Organization.