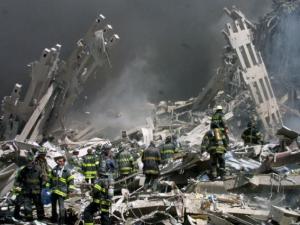 NEW YORK (AP) – First responders and residents who were stricken with cancer after being exposed to the toxic ash that exploded over Manhattan when the World Trade Center collapsed would qualify for free treatment of the disease and potentially hefty compensation payments under a rule proposed Friday by federal health officials.

After months of study, the National Institute for Occupational Safety and Health said in an administrative filing that it favored a major expansion of an existing $4.3 billion 9/11 health program to include people with 50 types of cancer, covering 14 broad categories of the disease.

People with any of the cancers on the list could qualify for treatments and payments as long as they and their doctors make a plausible case that the disease was connected to the caustic dust.

The decision followed years of emotional lobbying by construction workers, firefighters, police officers, office cleaners, and many other people who fell ill in the decade after the terror attack, and were sure it had something to do with the many days they spent toiling in the gray soot.

“It’s amazing,” said Ernie Vallebuona, a former New York City police detective who retired after being diagnosed with lymphoma in 2004. “It’s nice to have the federal government recognize that your cancer was caused by ground zero. It’s something we’ve always known. I’m just ecstatic that we are finally being recognized. You almost felt like you were being brushed aside.”

NIOSH, which oversees the 9/11 health program, acted after an advisory committee made up of doctors, union officials and community advocates recommended that cancer be added to the list of covered conditions. Previously, the aid effort has only covered people with mostly less-serious ailments, including asthma, acid reflux disease and chronic sinus irritation.

The decision on whether to add cancer to that list is a difficult one, and there are still substantial questions about how the program will function.

While stories about first responders struck by cancer are common, there is still little scientific evidence of elevated cancer rates connected to either the trade center dust or other toxins at the ground zero recovery site.

Cancer experts also say that it usually takes many years for an environmental exposure to lead to a cancer case, due to the slow, undetectable development of many types of the disease. That means that many of the people falling ill with cancer now, or in the past 10 years, are unlikely to have gotten it as a result of the attacks.

Questions about whether the dust truly caused cancer was one of the reasons why Congress did not include it in the initial list of covered illnesses.

But some occupational health experts have expressed concern about the presence of carcinogens in the ash and soot, and the advisory panel said it believed there were enough toxins to create a risk. NIOSH director Dr. John Howard said in a statement that the agency had embraced all of the recommendations of the advisory panel, which had urged inclusion of a majority of the most common forms of cancer.

“We recognize how personal the issue of cancer and all of the health conditions related to the World Trade Center tragedy are to 9/11 responders, survivors and their loved ones,” Howard said.

The expansion proposal isn’t final yet. The rule will be open for public comment for several weeks, or up to two months, before being finalized. It will still be open to revisions, or even outright abandonment, during that time.

U.S. Reps. Carolyn Maloney, Jerrold Nadler and Peter King, three New York lawmakers who helped create the law creating the health program, then lobbied hard for its expansion, said in a joint statement that they were “thrilled,” and confident the change would go through as planned.

“As we have all seen with our own eyes again and again, cancer incidence among responders and survivors is a tragic fact, and we must continue to do everything we can to provide the help that those who are sick need and deserve,” they said.

There has been some concern that adding cancer to the list of covered conditions could put a severe financial strain on the program’s limited resources. Congress capped funding for the program at $1.55 billion for treatment and $2.78 billion for compensation payments. Those amounts will remain unchanged even if many people file for benefits.

Some 60,000 people have already enrolled in 9/11 health programs for those who lived or worked within the disaster zone. Up to 25,000 more could still join before the program closes.

Even before the proposal to add cancer, it is unclear whether the amount of money allocated would be enough to cover the compensation claims. Sheila Birnbaum, the special master overseeing applications for compensation, has said she might have to prorate payments based on the number of people who apply.

Backers of the program are already talking about getting more funding, and also extending the program, which is set to expire in 4 ½ years.

“Next, we need to start working to extend the Victims Compensation Fund past its current end point in 2016 in order to ensure that responders and survivors who develop these cancers after that will be able to receive compensation,” said the joint statement by Maloney, Nadler and King.

Noah Kushlefsky, an attorney who represents about 3,800 people who plan to enroll in the program, said he was confident Congress will eventually extend the program.