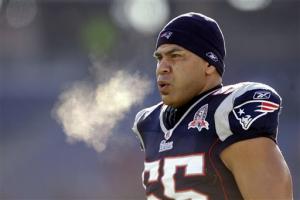 It also left everyone wondering what led to Seau’s death Wednesday morning in what police said appeared to be a suicide. He was 43.

“I’m sorry to say, Superman is dead,” said Shawn Mitchell, a chaplain for the San Diego Chargers. “All of us can appear to be super, but all of us need to reach out and find support when we’re hurting.”

Police Chief Frank McCoy said Seau’s girlfriend reported finding him unconscious with a gunshot wound to the chest and lifesaving efforts were unsuccessful. A gun was found near him, McCoy said. Police said no suicide note was found and they didn’t immediately know who the gun was registered to.

Neither Mitchell nor Seau’s ex-wife knew what might have led to the former first-pumping, emotional leader of his hometown San Diego Chargers to kill himself.

“We have no clues whatsoever,” Gina Seau said. “We’re as stunned and shocked as anyone else. We’re horribly saddened. We miss him and we’ll always love him.”

Seau’s death in Oceanside, in northern San Diego County, stunned the region he represented with almost reckless abandon. The same intensity that got the star linebacker ejected for fighting in his first exhibition game helped carry the Chargers to their only Super Bowl, following the 1994 season. A ferocious tackler, he’d leap up, pump a fist and kick out a leg after dropping a ball carrier or quarterback.

“It’s a sad thing. It’s hard to understand,” said Bobby Beathard, who as Chargers general manager took Seau out of Southern California with the fifth pick overall in the 1990 draft. “He was really just a great guy. If you drew up a player you’d love to have the opportunity to draft and have on the team and as a teammate, Junior and Rodney (Harrison), they’d be the kind of guys you’d like to have.”

Quarterback Stan Humphries recalled that Seau did everything at the same speed, whether it was practicing, lifting weights or harassing John Elway.

“The intensity, the smile, the infectious attitude, it carried over to all the other guys,” said Humphries, who was shocked that Seau is now the eighth player from the ’94 Super Bowl team to die.

Her son gave no indication of a problem when she spoke to him by phone earlier this week, she said.

In October 2010, Seau survived a 100-foot plunge down a seaside cliff in his SUV, hours after he was arrested for investigation of domestic violence at the Oceanside home he shared with his girlfriend. The woman had told authorities that Seau assaulted her during an argument.

There was no evidence of drugs or alcohol involved in the crash and Seau told authorities he fell asleep while driving. He sustained minor injuries.

“I just can’t imagine this, because I’ve never seen Junior in a down frame of mind,” Beathard said. “He was always so upbeat and he would keep people up. He practiced the way he played. He made practice fun. He was a coach’s dream. He was an amazing guy as well as a player and a person. This is hard to believe.”

Seau’s ex-wife told the Union-Tribune San Diego that he texted her and each of their three children separate messages: “I love you.”

Seau, who played in the NFL for parts of 20 seasons, is the eighth member of San Diego’s lone Super Bowl team who has died, all before the age of 45. Lew Bush, Shawn Lee, David Griggs, Rodney Culver, Doug Miller, Curtis Whitley and Chris Mims are the others. Causes of death ranged from heart attacks to a plane crash to a lightning strike.

Seau’s death also is among a few recent, unexpected deaths of NFL veterans.

Duerson’s family has filed a wrongful death suit against the NFL, claiming the league didn’t do enough to prevent or treat concussions that severely damaged Duerson’s brain before he killed himself in February 2011.

Former Atlanta Falcons safety Ray Easterling, who had joined in a concussion-related lawsuit against the league – one of dozens filed in the last year – died last month at age 62. His wife has said he suffered from depression and dementia after taking years of hits.

Seau is not known to have been a plaintiff in the concussion litigation.

However, his ex-wife told The Associated Press that Seau sustained concussions during his career.

“Of course he had. He always bounced back and kept on playing,” she said. “He’s a warrior. That didn’t stop him. I don’t know what football player hasn’t. It’s not ballet. It’s part of the game.”

Gina Seau said she didn’t know if the effects of concussions contributed to Seau’s death.

When Humphries joined the Chargers in a 1992 trade, he said it was obvious Seau was “the person who had the most energy, the most excited, the guy who tried to rally everybody.” Humphries said Seau “brought out a lot of youngness” in older players.

“So sad to hear about Jr Seau,” tweeted New Orleans Saints quarterback Drew Brees, who was with San Diego from 2001-05. “Junebug. Buddy. The greatest teammate a young guy could ask for. This is a sad day. He will be missed greatly.”

Seau called many of those around him “Buddy.” He often referred to teammates as “my players.”

Seau was voted to a Chargers-record 12 straight Pro Bowls and was an All-Pro six times.

“We all lost a friend today,” Chargers President Dean Spanos said in a statement. “This is just such a tragic loss. One of the worst things I could ever imagine.”

Seau’s greatest game may have been in the 17-13 victory at Pittsburgh in the AFC championship game in January 1995 that sent the Chargers to the Super Bowl. Playing through the pain of a pinched nerve in his neck, he spread out his 16 tackles from the first play to the second-to-last. San Diego was routed 49-26 in the Super Bowl by San Francisco.

Seau left the Chargers after the 2002 season when the team unceremoniously told him he was free to pursue a trade. He held a farewell news conference at the restaurant he owned in Mission Valley, and later was traded to Miami.

Seau retired a few times, the first in August 2006, when he said, “I’m not retiring. I am graduating.”

Four days later, he signed with the New England Patriots. He was with the Patriots when they lost to the New York Giants in the Super Bowl following the 2007 season, which ended New England’s quest for a perfect season.

Patriots owner Robert Kraft recalled the tight hugs he got from Seau in the locker room following games.

“He may have been one of the most charismatic Patriots players in franchise history,” Kraft said. “Today, the fans of the teams for which Junior played – San Diego, Miami and New England – lost more than a legendary football player. We lost our ‘Buddy.’ “

More than 100 people gathered outside of Seau’s home, only hours after he was found dead. Families showed up with flowers and fans wearing Chargers jerseys waited to get news.

Several hours after Seau was found, his body was loaded into a medical examiner’s van and taken away as fans snapped pictures and raised their hands in the air as if in prayer.

Family friend Priscilla Sanga said about 50 friends and family members gathered in the garage where Seau’s body lay on a gurney and they had the opportunity to say goodbye.

“Everybody got to see Junior before they took him away,” Sanga said. “He looked so peaceful and cold. It was disbelief. We all touched him and kissed him.”