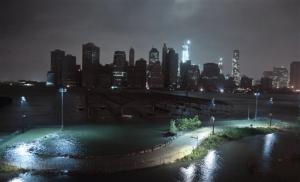 NEW YORK (AP) – Much of New York was plunged into darkness Monday by a superstorm that overflowed the city’s historic waterfront, flooded the financial district and subway tunnels and cut power to nearly a million people.

The city had shut its mass transit system, schools, the stock exchange and Broadway and ordered hundreds of thousands of New Yorkers to leave home to get out of the way of the superstorm Sandy as it zeroed in on the nation’s largest city.

Residents spent much of the day trying to salvage normal routines, jogging and snapping pictures of the water while officials warned the worst of the storm had not hit.

“Now it’s really turning into something,” said Brian Damianakes, taking shelter in an ATM vestibule and watching a trash can blow down the street in Battery Park.

Mayor Michael Bloomberg said Monday night that the surge was expected to recede by midnight, after exceeding an original expectation of 11 feet.

“The worst of the weather has come,” he said. He said New Yorkers were inundating the 911 system and getting stranded in cars, and urged people to stay put until the storm passed.

The storm had only killed one New York City resident by Monday night, a man who died when a tree fell on his home in the Flushing section of Queens.

The rains and howling winds, some believed to reach more than 95 mph, left a crane hanging off a luxury high-rise in midtown Manhattan, causing the evacuation of hundreds from a posh hotel and other buildings. Inspectors were climbing 74 flights of stairs to examine the crane hanging from the $1.5 billion.

The facade of a four-story Manhattan building in the Chelsea neighborhood crumbled and collapsed suddenly, leaving the lights, couches, cabinets and desks inside visible from the street. No one was hurt, although some of the falling debris hit a car.

On coastal Long Island, floodwaters swamped cars, downed trees and put neighborhoods under water as beachfronts and fishing villages bore the brunt of the storm. A police car was lost rescuing 14 people from the popular resort Fire Island.

The city shut all three of its airports, its subways, schools, stock exchanges, Broadway theaters and closed several bridges and tunnels throughout the day as the weather worsened.

Earlier, some New Yorkers defiantly soldiered on, trying to salvage normal routines and refusing to evacuate, as the mayor ordered 375,000 in low-lying areas to do.

Mark Vial pushed a stroller holding his 2-year-old daughter Maziyar toward his apartment building in Battery Park City, an area that was ordered evacuated.

On Long Island, floodwaters had begun to deluge some low-lying towns and nearly 150,000 customers had lost power. Cars floated along the streets of Long Beach and flooding consumed several blocks south of the bay, residents said.

Gov. Andrew Cuomo, holding a news conference on Long Island where the lights flickered and his mike went in and out, said most of the National Guards deployed to the New York City area would go to Long Island.

“Long Island has become more and more vulnerable and the primary area of our concentration,” he said.

In the fishing village of Greenport, Sean Seal piled dirt and sandbags onto the alleyway behind his collectibles store where the water was steadily creeping up the street toward his front door. He only opened the shop about two months ago.

“We put everything up. Up on tables, up on shelves, as far as we could,” he said. “It’s gonna be devastating. We’ll lose a lot of stuff.”

Anoush Vargas drove with her husband, Michael to the famed Jones Beach Monday morning, only to find it covered by water.

“We have no more beach. It’s gone,” she said, shaking her head as she watched the waves go under the boardwalk.

The center the storm, a combination of Sandy, a wintry system from the West and cold air streaming from the Arctic, threatened to knock out the underground network of power, phone and high-speed Internet lines that are the lifeblood of America’s financial capital.

Despite the dire forecasts, many chose to embrace what was coming.

Tanja Stewart and her 7-year-old son, Finn, came from their home in Manhattan’s TriBeCa neighborhood to admire the white caps on the Hudson, Finn wearing a pair of binoculars around his neck. “I really wanted to see some big waves,” he said.

Nearby, Keith Reilly climbed up on a rail next to the rising waters of New York Harbor so his friend Eli Rowe could snap a photo of him in an Irish soccer jersey with the Statue of Liberty in the background.