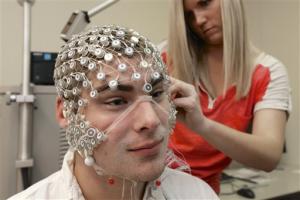 LINCOLN, Neb. (AP) – If all goes according to Dennis Molfese’s plan, the day is coming when a football player who takes a hit to the head will come to the sideline, take off his helmet and slip on an electrode-covered mesh cap.

The team’s medical staff will analyze the player’s brain waves on the spot and determine within minutes whether he can safely return to the game or whether he has sustained a concussion and, if so, how severe.

Putting the finishing touches on that device is among the projects planned in the University of Nebraska’s Center for Brain, Biology and Behavior, which opens this month in Memorial Stadium’s newly expanded east side.

CB3, as it’s called, is housed in the same $55 million structure that holds 38 luxury suites and an additional 6,000 seats for the football stadium. The center is one of a number of university-affiliated research centers across the nation looking for better ways to diagnose and treat traumatic head injuries and make football and other sports safer.

“There has been great concussion research that’s been going on for decades,” said Molfese, the CB3 director. “It’s disconcerting to realize just how little we really know.”

Tom Osborne, Nebraska’s retired football coach and athletic director, said CB3 and the adjoining Athletic Performance Lab fit his vision for what he wanted to include in the stadium expansion.

The project was one of Osborne’s major initiatives in his five years as athletic director. Osborne envisioned a collaboration of the athletic and academic sides of the university. So while athletes participate in concussion studies, political science researchers might use CB3’s brain-scanning technology to see if they can figure out why some people lean conservative and others liberal.

Concussions have become one of the top concerns in sports in recent years after prominent brain injuries and disease in former NFL players, driven in part by some high-profile suicides. Thousands of former players are suing the league, saying that for years the NFL did not do enough to protect players from concussions. The NCAA also is addressing the issue.

“There are a lot of things that are very important with the NCAA as far as the health and safety of the student-athlete,” NCAA chief medical officer Brian Hainline said, “and concussion is right up there as first and foremost. It’s the elephant on the table, and we, with everyone else, we have to solve it.”

There are about 300,000 sports-related concussions reported in the United States annually, and hundreds of millions of dollars have been funneled into research, with much of the funding going to universities.

Nebraska recruited the 67-year-old Molfese away from the University of Louisville, giving him virtual carte blanche in the design and equipping of CB3.

Molfese is among 14 experts serving on the National Academy of Sciences Institute of Medicine Committee on Sports-Related Concussions in Youth, which will report to Congress and President Barack Obama on brain injuries in children and young adults. He also heads a Big Ten-Ivy League partnership studying brain injuries in sports.

Nebraska’s brain center is connected by a 100-foot skywalk to the new Athletic Performance Lab, which will research, among other things, injury prevention and high-tech ways to maximize performance of athletes. CB3 and the performance lab will partner on some projects.

CB3’s main attraction is a type of magnetic resonance imaging machine – known as a functional MRI – that tracks the brain’s blood flow. It’s hoped the $3 million scanner helps in the effort to better define what is and is not a concussion.

“There’s no question it’s going to move the dial forward,” the NCAA’s Hainline said. “The big, hoped-for dream would be, let’s have a biomarker in brain imaging. If you’re to the left of that, you’re safe; if you’re to the right of it, you’re not. That’s probably a few years out. But functional brain imaging and blood flow are going to be a very important part of that.”

The MRI machine also can be used on game days to assess injuries of all kinds.

Molfese said the sideline concussion assessment tool would be the first of what he hopes are many groundbreaking developments to come out of CB3. The device would allow medical personnel to go beyond the standard practice of asking the injured athlete questions and judge, based on his or her answers, whether it’s safe for him or her to return to a game.

If a linebacker took a hit to the head, he would come to the sideline and have an electrode net placed over his head. Battery-powered brain-recording equipment would measure the player’s responses to stimuli.

“We can get an idea of what area of the brain is being involved in the process, whether the speed of processing is at the rate it should be,” Molfese said. “The different areas of the brain that normally integrate information quickly stop doing that, so that’s another way we should be able to pick up whether there is an injury or not.”

Molfese said the device, which should be ready for use within one to two years, eventually could be used in hospitals to screen patients for head injuries.

Osborne said he’s fascinated by the possibilities. He said suspected concussions were dealt with the same way throughout his football coaching career. The athletic trainer would hold up two or three fingers in front of the woozy player’s face as he came off the field and ask him how many.

“If you could come close,” Osborne said, “they’d put you back in. That wasn’t very effective.”