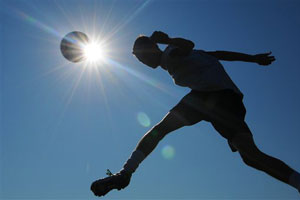 The guidelines replace a more restrictive policy based on old thinking that kids were more vulnerable to heat stress than adults. New research shows that’s not true, the academy says. With adequate training, water intake, time-outs and emergency treatment available on the sidelines, healthy young athletes can play even in high heat and humidity – within reason, the guidelines say.

“The more educated parents, athletes and staff are about risks associated with heat illness, the more likely they will think twice before allowing a competitive culture to overtake sound sensibilities,” said Dr. Cynthia Devore, co-author of the policy and a physician for schools in the Rochester, NY area..

Government data released last week showed that more than 3,000 U.S. children and teens younger than 20 received emergency-room treatment for nonfatal heat illness from sports or exercise between 2001 and 2009.

A few young athletes die annually from heat-related illness. Over a 13 year period, 29 high school football players died from heat stroke, data from the American Football Coaches Association and others show. Football is a special concern, because players often begin intense practice during late-summer heat, wearing uniforms and padding that can be stifling.

Dr. Michael Bergeron, a University of South Dakota sports medicine specialist, said the academy’s old policy was often ignored because it recommended limiting or avoiding sports even in common hot weather conditions. The new policy is more detailed and nuanced, recommending that athletes be evaluated individually for play in hot weather.

Still, Bergeron warned that overzealousness can be dangerous even for healthy kids, and even in relatively tame summer weather.

“You can take somebody in 80-degree heat and you can kill them if you work them hard enough,” he said.

The guidelines don’t list temperature or humidity cutoffs, but say safety should be the top priority.

–Teams should have emergency plans with trained personnel and treatment available and policies for avoiding heat illness.

–Give kids about two weeks to adapt to preseason sessions, gradually increasing intensity and duration. Closely monitor more vulnerable kids, including those who are overweight or have diabetes.

–Make sure athletes are well-hydrated before practice or games. During activity, kids aged 9-12 should drink about half a cup to a cup of water every 20 minutes; for teens, 5 or 6 cups an hour. Sports drinks containing electrolytes and sodium should be offered during extra strenuous activity.

–Educate everyone about signs of heat stress, including dizziness, muscle cramps, headaches and nausea. Kids with symptoms should be sidelined and treated immediately; athletes should be encouraged to report if teammates seem to be struggling.

Lindsey Tanner can be reached at http://www.twitter.com/LindseyTanner