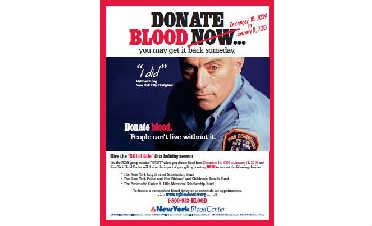 Fire Commissioner Nicholas Scoppetta and Dr. Christopher Hillyer, President and CEO of New York Blood Center (NYBC) will announce the launch of “The FDNY/NYBC Critical Days Program” at 10 a.m. on Monday, December 14 at FDNY Headquarters, 9 Metrotech Center, Brooklyn. This program builds upon the already strong relationship between the FDNY and NYBC by bringing monetary donations to FDNY-related charities for blood donated in the FDNY’s name.

Starting December 18 and lasting through January 11, 2010, NYBC will make a $10 contribution for every pint of blood donated using the FDNY group number, 4FDNY. At the conclusion of the program, the total amount of money donated will be evenly split among three charities; the New York City Bravest Scholarship Fund, the New York Police and Fire Widows’ and Children’s Benefit Fund, and the Paramedic Carlos R. Lillo Memorial Scholarship Fund. Blood donors must mention the FDNY group number (4FDNY) at the time of donation and the blood donation must take place at one of NYBC’s New York or New Jersey donor centers or blood drive locations. This opportunity is available to any member of the public wishing to donate blood.

“Helping people and saving lives is in the blood of every member of the New York City Fire Department. Every day our members tirelessly give of themselves to the citizens of New York City,” said Commissioner Nicholas Scoppetta. “This is the season of giving, and I can think of no better gift one can give than the gift of life through a blood donation. Every pint of blood donated will help someone’s father, mother, sister, brother or child.”

NYBC’s Dr. Christopher Hillyer, who is currently featured in a television and radio public service campaign with FDNY Firefighter Matt Long, said: “With the Critical Days Program, our donors can literally extend their lifesaving gifts, all to the benefit of the three outstanding charities supported by our firefighters.”

About the Carlos R. Lillo Memorial Scholarship Fund:
Carlos Lillo was an FDNY EMS Paramedic was killed on September 11, 2001 while responding to the attacks on the World Trade Center. Funds from the scholarship are used to pay for Emergency Medical Technicians to attend an accredited New York State Paramedic course of their choice.