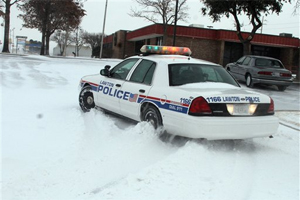 LITTLE ROCK, Ark. (AP) – A rare Southern blizzard slipped out of Arkansas early Wednesday after knocking out power to thousands of homes and businesses and causing traffic accidents in which three people were killed.

More than 10 inches of snow fell from eastern Oklahoma through much of Arkansas beginning Christmas morning, and powerful winds led forecasters to issue blizzard warnings for parts of both states. Wind chills could reach as low as minus-11 degrees.

A 21-vehicle pileup near downtown Oklahoma City slowed traffic on Interstates 35 and 40. A 28-year-old woman died in a crash on U.S. 412 near Fairview, Okla., and two passengers in a car near Enola, Ark., died when their vehicle slid into oncoming traffic.

Nearly 200,000 customers lost electricity in Arkansas, where gusts of over 30 mph downed tree branches and power lines that hung heavy with snow and ice.

Little Rock had its first measurable Christmas Day snowfall in the capital since 1926, according to the National Weather Service in North Little Rock. The 10 inches was the second-greatest December snowfall ever.

Gov. Mike Beebe summoned the National Guard after emergency officials in the central part of the state said ambulances were having a tough time getting around.

I-40 west of Little Rock became slick Christmas afternoon, forcing numerous motorists to try to find shelter for the night. Jerry Wall, a worker at Love’s Travel Stop in Morrilton, ordinarily a 45-minute drive from Little Rock, said the restaurant was packed about 5 p.m.

“All of our booths are full. I can’t see an empty parking spot. They’re parking on the sides, across the street,” Wall said. “It had been sleeting and it’s snowing now. It’s coming down pretty good.”

The business reserved nearby hotel rooms for its workers, Wall said.

In Oklahoma, the large pileup began about 3 a.m. Tuesday when a semitrailer jackknifed on I-40 on a bridge over the Oklahoma River, state Highway Patrol Trooper Betsy Randolph said. Other vehicles hit the semi and other semis slid into the vehicles, sandwiching them, she said. In all, there were 10 separate crashes involving 21 vehicles and three tractor-trailers.

“Some of them, it took the entire top of the car off, like they slid under a semi,” Randolph said.

In Faulkner County, Cloe and Anastasia Meredith of Pangburn died when the car they were in slid across the center line on Arkansas 36, state police said.

Amanda Sue Goodman died in a crash in Major County, Okla. The OHP report said the two-lane road was snowy about 10 a.m. The SUV Goodman was riding in collided with a tractor-trailer. Another adult and a 4-year-old child in the SUV were ejected from the vehicle and had head, arm and internal injuries.

The snow had largely stopped in Oklahoma by late afternoon, and highway officials said early Tuesday evening that roads in Oklahoma City were clear, though motorists should still be wary of slick spots. But the Oklahoma Department of Transportation advised people to stay off the roads, some of which were slick and had snow drifts.

The state’s snowfall totals were modest in most of Oklahoma – from a tenth of an inch to 2 inches, according to Daryl Williams, a forecaster with the National Weather Service in Norman.

“The wind is blowing around so hard that it’s going to be hard to get any accurate readings for snowfall totals,” Williams said. Strong winds were forecast overnight, creating blizzard-like conditions with blowing snow and wind chills falling into the single digits, particularly in south-central and southwest Oklahoma, he said.

As the system reached Arkansas, rain fell and temperatures dropped, making for hazardous driving conditions in the western part of the state, especially from Fayetteville southeast.

The weather service reported late Tuesday that a foot of snow had fallen in the southwestern Arkansas town of Vandervoort.