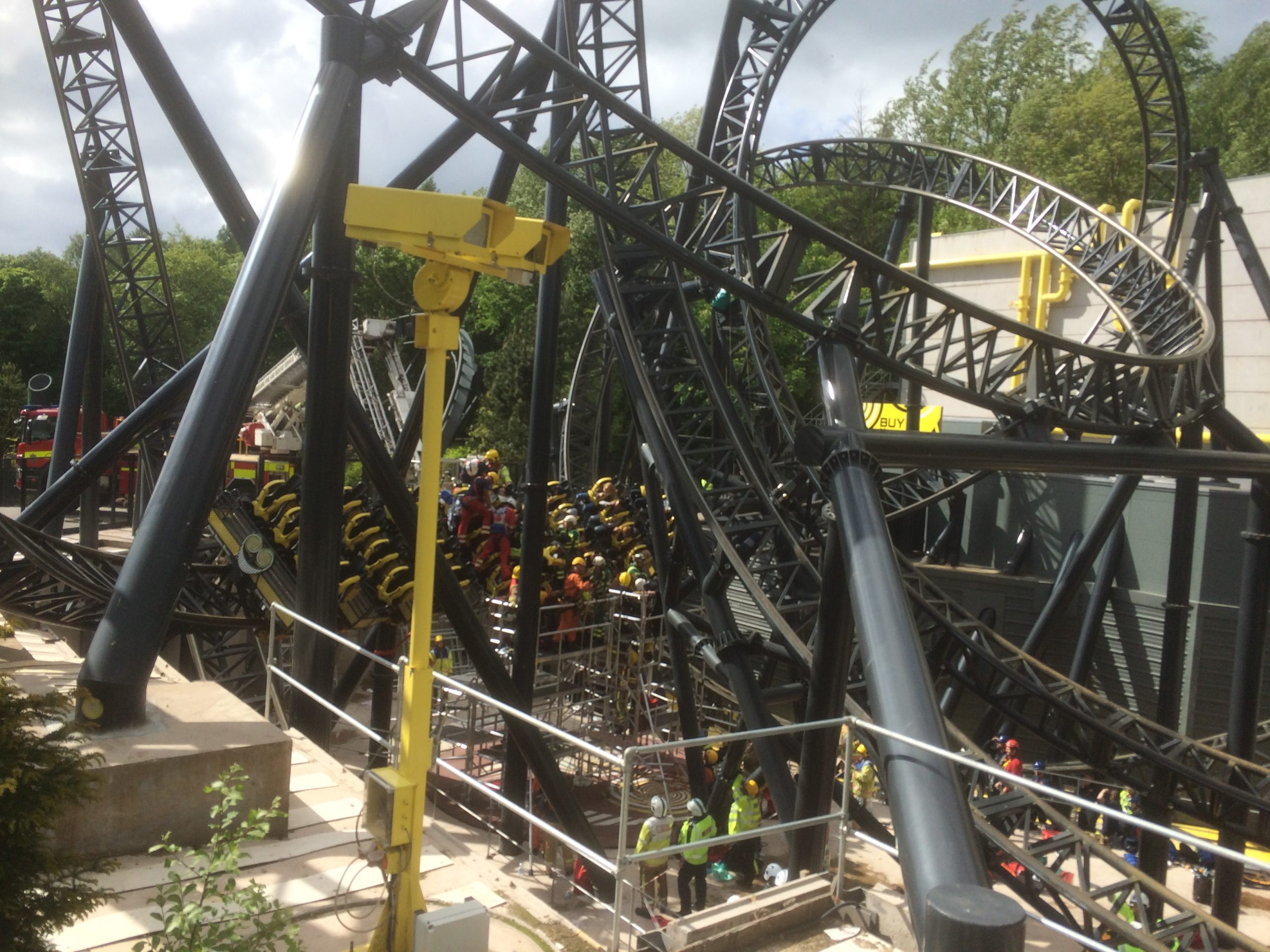 A teenage girl girl on her first date at Alton Towers with her student boyfriend has had to have her leg amputated above the knee after the horrific rollercoaster crash.

Health chiefs in Staffordshire have confirmed that 17-year-old Leah Washington, of Barnsley, has lost her left leg, and also suffered a fractured hand in the crash.

Her boyfriend, textile student Joe Pugh, 18, broke both legs and injured his hands as their carriage on The Smiler ploughed into another empty carriage last week.

He added that it was only the prompt action of medics at the scene that saved his daughter’s life as she bled heavily from her injuries.

“We would like to thank our family and friends and all the well-wishers for their support,” he said. “Leah has suffered a life-changing injury and now has many months of rehabilitation ahead of her.

“We have done this to put people’s minds at rest, and we would also ask everyone to respect Leah’s privacy as she undergoes this rehabilitation.

“We would like to thank all the emergency services at the scene and all the hospital staff who saved Leah’s life.”

Boyfriend Joe’s dad added: “I would like to thank our friends and family for their support.

“We would also like to thank the staff at the hospital who have been very accommodating, have been lovely to us and have protected our privacy.

“We would ask people to respect Joe’s privacy now, and over the weeks and months ahead.”

Dancer Vicky Balch, 20, from Leyland in Lancashire, is said to have suffered lifechanging leg injuries in the crash, and is expected to make a substantial claim for damages to support her recovery.

Vicky’s parents Brian, 55, and Karen, 56, said: “This is certainly not how she intended to celebrate her 20th birthday. The family remain grateful for the stream of good wishes.”

The family’s lawyer said: “Whilst it is anticipated that there will be a substantial claim for damages to support her recovery, the main focus for the family is Victoria’s wellbeing and ensuring that the investigation into the accident is carried out swiftly and vigorously.

“They have every confi-dence in the police and the Health and Safety Executive. It is expected serious consideration will be given to criminal prosecutions.

“The family are distraught that a fun day out could turn into such a potentially lifechanging disaster.”

The four most seriously injured are being treated at the Royal Stoke University Hospital and the University Hospital Coventry. A fifth victim, Chanda Singh, 49, from Wednesbury, who was sitting in the second row of The Smiler with daughters Vanisha, 29, and Meera, 26, has been admitted to Walsall Manor Hospital with internal injuries.

She had surgery to her stomach and has a damaged liver and blood clots, her daughter said.

Last night an Alton Towers spokeswoman said: “We are deeply saddened by Leah’s news, and all our thoughts are with her and her family.

“We have made contact with all the families and have assured them that we will provide full support to all of those involved now, and throughout their recovery and rehabilitation.”

In all 16 people were injured in the crash, most “walking wounded” treated by paramedics. Nick Varney, chief executive of Merlin Entertainments, said the incident was a “terrible event” for everyone involved.

“We are doing all we can to provide our support to those injured and their families,” he added.

In a letter to all 16 people hurt in the accident, Merlin Entertainments said it had told victims to instruct a lawyer to submit a claim for compensation, which would be dealt with”swiftly”.

The group said: “Since the accident we have done our best to provide appropriate communication and support to those involved and to their families.

“We absolutely recognise what a difficult time this is for everyone, especially those who have been so seriously injured.

“Over the course of the weekend we have written again to all of the 16 people involved or to their families. These letters were all hand-delivered by Alton Towers representatives.

“Irrespective of the outcome of the current investigations into the causes of the accident, in these letters we have accepted full responsibility to those who had been injured in the accident and confirmed that we will ensure that compensation will be provided to them.

“We have recommended each of the injured guests or their families instruct a lawyer and submit a claim for compensation which we will ensure is dealt with swiftly and sensitively.

“In addition we have engaged the services of Health and Case Management Ltd (HCML) – a leading firm of specialist independent rehabilitation providers – to provide all of those involved with the best support for their individual needs whether from the NHS or by providing additional support. HCML have already made contact with some of those affected.”