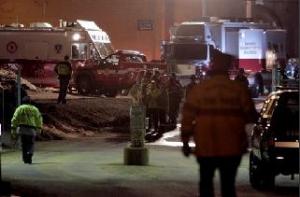 MIDDLETON, Mass. – There have been no indications that air or water quality in the area of a weekend chemical plant explosion has been compromised, investigators said.

The explosion Sunday night at the Bostik Inc. complex in Middleton sent four workers to the hospital, shook area homes and caused a fire.

The resulting four-alarm fire at the plant, which manufactures plastics and adhesives, was put out about an hour after the explosion was reported at 7:39 p.m.

The four people who were hurt suffered injuries that weren’t considered life-threatening. Their names were not released.

The explosion damaged two buildings in the complex and could be heard and felt miles away, State Fire Marshal Stephen Coan said.

The cause of the blast remained under investigation and officials are continuing to monitor the environment, including the nearby Ipswich River.

Hazardous-materials and environmental protection teams were called to monitor the quality of the air and water because of runoff into the neighborhood around the plant, where several homes have wells.

“There is no danger at this time for individuals who live in this area,” Coan said.

Some neighbors reported a strange odor in the air, but Middleton Fire Chief Frank Twiss said there is nothing to fear and no homes had to be evacuated.

The cause of the blast remained under investigation.

Beverly Peterson lives about a quarter of a mile from the plant and said she felt the blast.

“Oh, yeah, it shook our house something fierce,” she said.

The four people who were hurt went through a decontamination procedure at a hospital and were released, a hospital spokeswoman said.

Coan said he didn’t know what the workers were doing at the time of the explosion or what tasks normally happen in the building where the explosion occurred.

“We haven’t had an opportunity to interview the workers or reach that level yet,” he said.