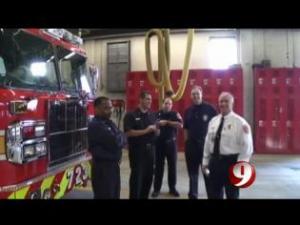 He survived his first heart attack during the snow storm that trapped the area’s commuters in a massive gridlock, Jan. 26, 2011. Through the thunder snow, four first responders treated and transported Newman in a fire engine.

“They were very efficient, capable, and cool, fortunately, knew what they were doing,” says Newman who later choked up and says words cannot fully express his gratitude to his rescuers.

During snow fall, Newman felt tightness in his chest after shoveling his driveway around 7 p.m. His wife, Linda Singer, saw him lying down inside the house. She realized he was suffering from a heart attack and dialed 9-1-1.

“He was just totally white, no coloring at all, and he was shaking like a leaf,” says Linda Singer. She says after getting the busy tone a few times, she got through to a dispatcher. Four first responders arrived in a fire engine.

Lead paramedic Dwayne Dutrow says he was determined to get Newman to Suburban Hospital before his heart stopped.

The snow storm slowed down the rescue. The crew treated and transported Newman to the hospital in 18 minutes, according to Dutrow.

The fire engine navigated its way around stranded cars and snow- covered roads.

“I tried to figure the best way to get there, stay away from hilly terrain and go as flat as possible,” says Lawrence Morton, the driver.

“It was unprecedented, and the traffic conditions were terrible at best,” says Montgomery County Fire Chief Richard Bowers.

The physicians at Suburban hospital said he had ten or fifteen more minutes before he might not have survived the heart attack, according to Newman.

Fire Chief Bowers says Newman’s rescue is a shining example of the importance of the work done by four-person first responder teams.