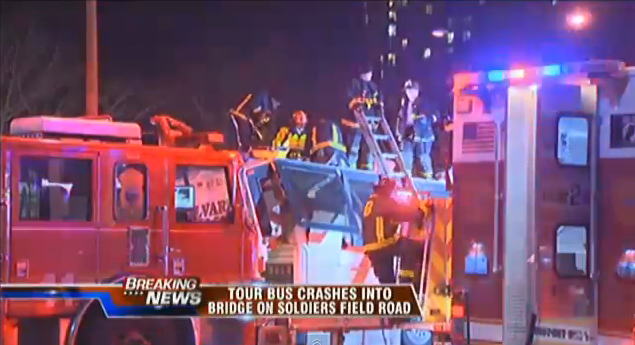 Posted by cboro564 on YouTube – After a visit to Harvard University, dozens in a group of high school students and their adult chaperones were injured when their charter bus hit a bridge after police say the driver failed to heed low-clearance warning signs.

One person was hospitalized with life-threatening injuries and three with serious injuries, the Boston Emergency Medical Services said. Thirty-four people were injured in all, EMS said.

The Calvary Coach bus was carrying 42 people and was heading back to the Philadelphia area when it struck an overpass on Soldier’s Field Road in Boston, a major crosstown road, at around 7:30 p.m. Saturday, Massachusetts State Police said. Some passengers were trapped for more than an hour as rescue crews worked to free them.