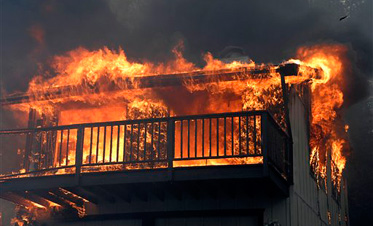 SANTA BARBARA, Calif. — Winds swirled and homes of all sizes burned as a wildfire descended on this scenic coastal city amid hot, dry conditions that resembled late summer more than the middle of spring.

Firefighters had a brief respite of moderate breezes early Thursday, but expected another day of heat, gusts and potential destruction as they took on a blaze that had swelled to 500 acres and forced the evacuation of more than 5,000 homes.

TV news helicopters showed at least a dozen homes ablaze as night fell, but authorities had no immediate estimate of how many had been destroyed.

“The fire is very spotty and patchy and there’s a lot of smoke,” which makes it difficult to see the damage,” Santa Barbara County fire Capt. David Sadecki said. “Because it involves people’s homes, we don’t want to speculate.”

The fire went from tame to explosive Wednesday afternoon as gusts up to 50 mph in triple-digit temperatures hurled the fire from north to south into neighborhoods, Santa Barbara County fire Capt. David Sadecki said.

It remained out of control Thursday morning, though temperatures dropped to the 60s and winds had grown calm.

Some of the evacuated were allowed to return to their homes early Thursday, the county said in a news release, but officials had no estimate of how many people were affected.

Crews from surrounding counties and inmates from the California Department of Corrections were arriving on the scene Thursday morning.

Firefighters who had worked through Wednesday’s fierce flames dozed in sleeping bags on the lawn of the command center while others worked through the night in evacuated neighborhoods.

“The firefighters are picking houses and seeing if they can make a stand,” Sadecki said.

The city has experienced a number of wildfires. Less than six months ago a fire destroyed more than 200 homes in Santa Barbara and neighboring Montecito. The new fire reached the area burned by that blaze Wednesday. And in 1990, a fire killed one and destroyed 641 homes, apartments and other structures in the county.

Santa Barbara, a city of 90,000 about 100 miles west of Los Angeles, rises rapidly from the coastline on the south to the foothills of the Santa Ynez Mountains to the north. It is subject to “Sundowners” – strong winds that blow downslope through passes and canyons of the mountain range and offshore.

Elsewhere, firefighters were battling a blaze in rural southeastern Arizona that destroyed three houses near Sierra Vista on Tuesday and injured a man. The fire charred about 4,200 acres near Fort Huachuca, threatening about 50 homes in a subdivision. Containment was estimated at 15 percent Wednesday.

In southern New Mexico, a wildfire in the mountains near Timberon charred about 100 acres, burning at least three structures. State Forestry spokesman Dan Ware said firefighters hadn’t been able to confirm what types of buildings they were.

Fifteen residents have been evacuated, and 70 structures were threatened, Ware said.