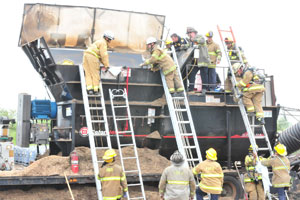 LAUREL, Md. (WUSA) — A worker who was trapped under a mulch-dyeing machine in Laurel on Tuesday was removed safely but suffered serious leg injuries.

A surgical team arrived via Maryland State Police helicopter to assist with the technical rescue.

“The victim was so entangled in heavy metal machinery that paramedics feared surgical intervention would be required to free the critically injured worker. Paramedics requested a “Go Team” respond to the scene. A GO TEAM is a group of medical professionals that normally work in a hospital environment. When requested, a team of surgeons, nurses, anesthetists and other medical staff will be taken to the scene and if needed do what they need to do to remove the patient from entrapment,” officials said in a news release.

Rescue workers and medical personnel had to sedate the victim because he was in so much pain during the rescue effort, officials said.

It took about 90 minutes to free the man from the machinery. He was freed at around 12:30 p.m.

“The victim was still intubated and suffering from critical injuries to both legs. His injuries, while critical, are not considered life threatening at this point,” officials said.

Man freed after being trapped in machine at Laurel Mulch Facility: MyFoxDC.com