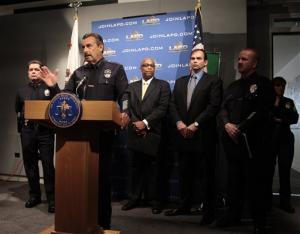 LOS ANGELES (AP) – The main suspect in the brutal beating of a San Francisco Giants fan outside Dodger Stadium was sent back to prison Monday for 10 months for a parole violation involving access to a gun.

Giovanni Ramirez, 31, has been in custody since May 22, when police arrested him in connection with the attack on Bryan Stow then held him on the parole issue.

No evidence was presented about the attack on Stow at Monday’s closed hearing.

Ramirez has not been charged in the beating, and police have been in no hurry to present a case to prosecutors while he is in jail on the weapons case.

Typically when a suspect is arrested, police must present their case to prosecutors within two working days. Suspects can be held longer if the case involves suspected parole violations.

Investigators have said they found a handgun in a laundry basket at the house where Ramirez was staying.

A court commissioner found Monday there was cause to believe the convicted felon had violated his parole by having access to a weapon. That charge was amended from an initial allegation of being a felon in possession of a firearm.

Ramirez’s parole attorney said he would appeal the finding.

“There’s an issue about whether or not he even had any knowledge that (the gun) was inside this residence,” lawyer J. Christopher Smith said after the hearing. “The fight’s not over.”

Court records show Ramirez was convicted in 2005 of possession of a firearm by a felon.

It was unclear if Ramirez would be sent to state prison or if he would serve his parole violation term in county jail.

Ramirez’s lawyers assert their client was nowhere near Dodger Stadium at the time of the March 31 attack.

Attorney Jose Romero has said 11 family members and friends have provided an alibi for Ramirez, saying he was at an aunt’s house. Neighbors are also supporting the claim, Romero said.

Stow, a 42-year-old paramedic, remains in critical but stable condition under heavy sedation to prevent seizures caused by traumatic brain injury. He is unconscious and doctors are trying to wean him off the medication to better determine his level of brain activity.

Police are still looking for a second attacker and a woman who drove the car carrying the men.