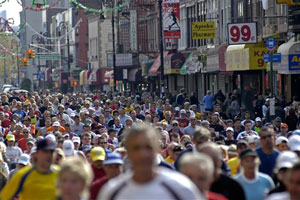 NEW YORK (AP) – It’s dramatic news when a marathon runner collapses with no pulse. Now a big study finds such calamities are rare and usually due to a pre-existing heart problem.

The study also found such incidents are increasing as more runners try to go the distance.

“You hear about this more and more,” said Dr. Aaron Baggish, senior author of the study

Baggish, who runs a program for athletes with heart issues at Massachusetts General Hospital, and co-authors present their analysis in Thursday’s issue of the New England Journal of Medicine.

The study covers 10.9 million runners who participated in marathons or half-marathons in the United States from 2000 to 2010.

By scouring media reports and checking with medical staff of races, the researchers identified 59 cases of cardiac arrest, where a runner became unconscious with no pulse during the race or within an hour of finishing. Cardiac arrest is when the heart stops because of a heart attack, a rhythm problem or other disorder.

Forty-two of the runners died.

Most of the cardiac arrests involved marathons rather than half-marathons, and 51 of the 59 cases happened in men.

More cases showed up during 2005-2010 than in the preceding five-year span, but that’s just because more people are participating in the races, Baggish said. More worrisome was the finding that among male marathoners, the rate of cardiac arrest per 100,000 runners was higher during the latter half of the decade than in the first half.

Baggish thinks that’s because of a shift in attitudes about who can run long distances. Even a decade ago, 26.2-mile marathons were considered appropriate only for very athletic people, he said. But more recently people have come to think of it as “something anyone can do,” and even as a healthy activity for lowering the risk of heart disease, he said. So it has attracted people with a family history of early heart disease or early deaths, and “these are just the people who are likely to get into trouble.”

In the 31 cardiac arrests for which researchers could find a cause, most were due to clogged, hardened arteries or hypertrophic cardiomyopathy, a sometimes inherited condition in which an unusually thick heart muscle can interfere with the pumping rhythm. Most of the victims were unaware of their pre-existing conditions, Baggish said.

Baggish said he would encourage aspiring and experienced runners to talk to their doctors about their heart risks for distance running.

Dr. Gordon Tomaselli, president of the American Heart Association, called the study “reassuring” for finding so few cardiac arrests. For most people, “running a marathon, if you are so inclined, is a reasonably safe proposition,” he said.

Tomaselli, a heart specialist at Johns Hopkins University, also said runners should pay attention if they feel chest pain, dizziness, lightheadedness or unusually short breath or rapid heartbeat while running. “You should listen to your body,” he said.

In the same issue of the journal, other doctors wrote a brief report about treating three runners who suffered heart attacks after finishing last year’s Boston Marathon. None had cardiac arrest and all survived.

“We don’t want to alarm people about marathon running. The benefits of exercise are well established” said one of that report’s authors, Dr. Navin Kapur of Tufts Medical Center in Boston. The report shows even seasoned marathon runners can have heart attacks, something paramedics should keep in mind if a runner shows suggestive signs, he said.