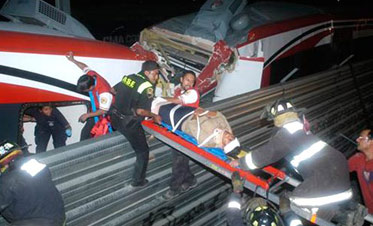 MEXICO CITY — An official says at least 70 people have been injured in a commuter train crash on the outskirts of Mexico City.

Mexico State civil defense employee Heladio de la Cruz says many injured were being treated early Sunday at several local hospitals but there was no immediate information on their condition. Emergency personnel were working to remove all the victims from the train cars.

Officials say one train apparently ran into another Saturday on the recently inaugurated Suburban Railway in the State of Mexico, which borders Mexico City. Photos from the scene showed crumpled train cars still on the tracks.

The train service was launched in mid-2008.