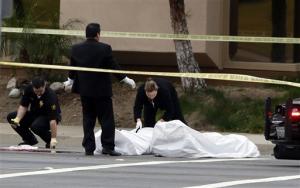 TUSTIN, California (AP) – A shooting spree early Tuesday left three people dead and two others injured in Orange County, and the search for the gunman ended when he shot himself to death in a stolen car as police closed in, authorities said.

There were multiple crime scenes in the county south of Los Angeles and many more victims who were shot at but unhurt, said Tustin Lt. Paul Garaven.

After two carjackings, one victim was hospitalized and another victim died, Garaven said.

After a third call to police, an officer arrived and found two more victims – one dead and the other injured.

Officers located the suspect and followed him into the city of Orange, Garaven said. “When they tried to stop, he killed himself in the car,” Garaven said.

The suspect is a male, although Garaven couldn’t confirm his age. He didn’t have the sexes of all the victims.

The lieutenant said the gunman succeeded in stealing a vehicle at each carjacking.

A spokeswoman for the California Highway Patrol said they didn’t have any active crime scenes on the freeway but the southbound 55 McFadden Avenue off-ramp would be closed until further notice.

The motive for the shootings is still unclear and it’s also unclear if the victims knew each other or the shooter, Amormino said.

Authorities were processing six crime scenes across the county.