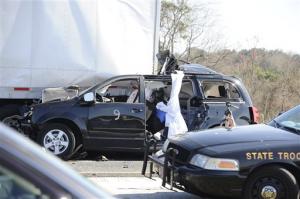 GAINESVILLE, Fla. (AP) – A long line of cars and trucks collided one after another early Sunday on a dark Florida highway so shrouded in haze and smoke that drivers were instantly blinded. At least 10 people were killed.

When rescuers first arrived, they could only listen for screams and moans because the poor visibility made it difficult to find victims in wreckage that was strewn for nearly a mile, police said.

Authorities were still trying to determine what caused the pileup south of Gainesville on Interstate 75, which had been closed for a time before the accidents because of the mixture of fog and heavy smoke from a brush fire that may have been intentionally set. At least a dozen cars and six tractor-trailers were involved, and some burst into flames.

Steven R. Camps of Gainesville said he and some friends were driving home several hours before dawn when they were drawn into the pileup.

Photographs of the scene taken hours later revealed an aftermath that resembled a Hollywood disaster movie. Twisted, burned-out vehicles were scattered across the pavement, with smoke still rising from the wreckage.

Cars appeared to have smashed into the big rigs and, in one case, a motor home. Some cars were crushed beneath the heavier trucks.

Reporters who were allowed to view the site saw bodies still inside a burned-out Grand Prix. One tractor-trailer was burned down to its skeleton, charred pages of books and magazines in its cargo area. And the tires of every vehicle had burned away, leaving only steel belts.

Before Camps hit the fog bank, a friend who was driving ahead of him in a separate vehicle called to warn of the road conditions. The friend said he had just seen an accident and warned Camps to be careful as he approached the Paynes Prairie area just south of Gainesville.

“You couldn’t see anything. People were pulling off the road,” he said.

Camps said he began talking about the road conditions to a man in the car stopped next to them when another vehicle hit the man’s car.

The man’s vehicle was crushed under a semi-truck stopped in front of them. Camps said his car was hit twice, but he and another friend were able to jump out. They took cover in the grass on the shoulder of the road.

All around them, cars and trucks were on fire, and they could hear explosions as the vehicles burned.

“It was happening on both sides of the road, so there was nowhere to go. It blew my mind,” he said, explaining that the scene “looked like someone was picking up cars and throwing them.”

Authorities had not released the names of victims Sunday evening, but said one passenger car had four fatalities and a “tour bus-like” vehicle also was involved in the pileup.

At least 18 people were taken to a hospital.

All six lanes of the interstate – which runs virtually the entire length of Florida – were closed most of Sunday afternoon as investigators surveyed the site and firefighters put out the last of the flames.

“Our standard operating procedure is to get the road open as quickly as possible but let’s not forget we have 10 people who are not with us today,” said Lt. Patrick Riordan, a Florida Highway Patrol spokesman. “So we are going to take our time assessing the situation.”

It was not clear when the highway would fully reopen because part of the road melted, police said.

At some point before the pileup, police briefly closed the highway because of the fog and smoke. The road was reopened when visibility improved.

Riordan said he was not sure how much time passed between the reopening of the highway and the first crash.

Traffic was being diverted much of Sunday onto U.S. 301 and State Road 27, Riordan said.

A spokeswoman for the Florida Forest Service, Ludie Bond, said the fire began Saturday, and investigators were trying to determine whether the blaze had been intentionally set. She said there were no controlled burns in the area and no lightning.

Bond also said the fire had burned 62 acres and was contained but still burning Sunday. A similar fire nearby has been burning since mid-November because the dried vegetation is so thick and deep. No homes are threatened.

Four years ago, heavy fog and smoke were blamed for another serious crash.

In January 2008, four people were killed and 38 injured in a series of similar crashes on Interstate 4 between Orlando and Tampa, about 125 miles south of Sunday’s crash. More than 70 vehicles were involved in those crashes, including one pileup that involved 40 vehicles.