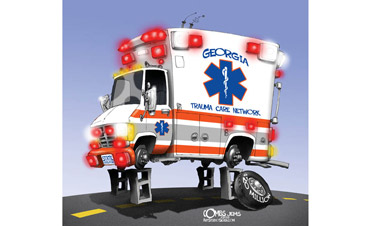 Seatbelts in Pickups? Georgia Says, No Way!
Experts estimate 700 trauma patients in Georgia die needlessly each year because of the state’s Ë™inadequate trauma services,à“ the”žAtlanta Constitution reports. But every year, the state, which has a trauma death rate 20% higher than the national average, says Ë™No thanksà“ to $20 million in federal highway funds that could improve trauma care. You see, to get that money Georgia would need to require the use of seatbelts in pickup trucks. And, if that’s not bad enough, Georgia taxpayers will spend an estimated $46.2 million in Medicaid funds in the next decade on trauma care for unbelted folks injured in pickup crashes. The logic just doesn’t add up.

Easier said than done. Air Methods Corp., the nation’s largest air ambulance operator, wants to put $11,000 goggles in all 343 of its helicopters, but it’s on a yearlong waiting list because goggle manufacturers give first priority to the military. Ë™The war in Iraq escalated, and the goggles weren’t available,à“ National EMS Pilot Association President Gary Sizemore, who flies for Air Method in Florida, told the Associated Press. Let’s not forget we’re fighting a war on trauma back in the U.S. every day.

Phony Medic Worked in the field for 17 Months
A month after taking over ambulance service in Longmont, Colo., American Medical Response (AMR) had to write a letter of apology to the Longmont Fire Department. Not the best way to start a relationship. It seems one AMR paramedic assigned to Longmont had forged his credentials. Worse yet, a local TV station reported that Todd Teel had worked as a paramedic for 17 months before AMR discovered the fraud last December.

AMR declined to discuss Teel, but released a statement saying he had worked as a paramedic in Denver on Ë™a non-emergency unit.à“ AMR says it didn’t verify the paramedic certification when he presented it, because he was a state-certified EMT with a good work record.

According to the statement, AMR’s Denver operation has implemented new processes: New hires can’t begin work until the company has copies of all their certifications and confirms them with the issuing agencies, and AMR will conduct credential checks twice a month to ensure employees keep current with credentials and licenses.

What a shame that it took this embarrassingÆ’and potentially tragicÆ’incident to demonstrate the need for employee credential verification. And let’s hope AMR’s new diligence isn’t confined to its Denver operations. After all, EMTs and paramedics touch their patients in the course of delivering care, so the public must have confidence those hands are qualified for the tasks they perform.

Respond First, Eat Later
We’ve all heard stories about how hard it can be to dismiss a civil-service employee, but the Austin (Texas) Fire Department (AFD) took such measures after an officer delayed a medical response so he could pick up some food.

In January, Lt. Michael Pooler’s engine was dispatched to a Code 3 respiratory distress call, with Austin/Travis County EMS (A/TCEMS) to follow. But Pooler delayed his engine’s departure by two minutes when he left the station to go to a restaurant next door. Fortunately, A/TCEMS paramedics arrived with no delay.

According to the Austin American Statesman, transcripts of a March interview with the fire department’s professional standards office quote Pooler explaining his thoughts as, Ë™This is really a nothing call àš I mean, it’d have been different if it was a box alarm (structure fire call) or, you know, a baby chokin’ or something.à“

In May, Acting Fire Chief Jim Evans suspended Pooler indefinitely for violating three AFD regulations and two Civil Service Commission (CSC) of Austin regulations. AFD declined to talk about the incident but provided the memo Evans sent to the CSC. According to that memo, because Pooler was a lieutenant Ë™in charge of an engine company, [his] act was not only a neglect of duty, but also a failure of leadership and supervisory judgment.à“ According to the CSC, Pooler has appealed his suspension and will receive a hearing.

Thumbs Up to the AFD for taking appropriate action on an incident that could have been swept under the rug.

The Ins and Outs of Patient Meds: Knowing about common medications...