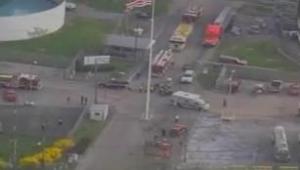 Firefighters planned to let the fire burn itself, and officials said the air quality was not a threat to nearby residents. The initial explosion occurred Monday night at the Carbide Industries plant and was followed by another blast a few hours later, though no one was injured in the later explosion, said Doug Hamilton, the city’s emergency management director.

Two other plant employees were treated and released from a hospital.

The workers who died were longtime employees who worked in the furnace department where the explosion occurred, said plant general manager John Gant. Jorge Medina, 56, of Louisville, died at University Hospital early Tuesday morning with third-degree burns over 90 percent of his body. An autopsy is planned for Steven Nicholas, 59, of Charlestown, Ind., who died Monday.

About 130 plant employees are out of work now, and Gant said he does not know when they will return.

The U.S. Chemical Safety Board said it was sending a team to the plant Wednesday to investigate.

Located along the Ohio River in West Louisville, the plant is part of a petrochemical complex dubbed Rubbertown. It makes calcium carbide products, which are used in metal fabrication and construction.

“It’s going to be a concern to anyone who has a breathing problem,” Stull said.

There was confusion between officials about who was responsible for notifying the public. Gant said Carbide Industries failed to notify authorities within 30 minutes of the explosion. Hamilton arrived at the scene and deemed the air quality was safe, but Louisville police asked the National Weather Service to send an alert advising residents to stay indoors for a few hours.

“Let’s not be too critical because people were overly cautious,” White said.