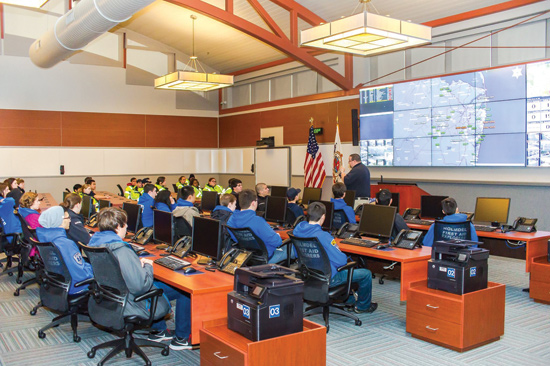 TRAINING THE FUTURE OF EMS

More than 90 student volunteers from 10 different fire and EMS cadet squads across the county attended the event. The day began with a trip to the Monmouth County Sheriff’s Office 9-1-1 Communications Center, where the junior first responders learned more about the critical role dispatchers
play during emergencies, including how calls are dispatched and to what agencies. The teens also got a tour of the facility before heading out to their next stop of the day-a presentation of nine different emergency response vehicles. Local fire, search and rescue, EMS, national guard, medical and sheriff’s departments came together to show the juniors their vehicles and tell them more about their jobs.

Freehold First Aid & Emergency Squad plans to host more of these events in the future, and are pleased that students were not only able to learn a lot, but also meet peers whom they may work with in the future.

We give a thumbs up to the Freehold First Aid & Emergency Squad for creating an engaging educational experience for young providers who are hungry to learn more about EMS. We give another thumbs up to all the participating agencies for donating their time and uniting in the name of education.

A DOSE OF REALITY

An investigative report done by TV news station WSAZ in Cabell County, W. Va., is shining a light on an issue plaguing the area–drug overdoses.

In the county, drug overdoses went up a shocking 300% from 2014 to 2015. Local first responders say they usually handle a few overdoses per day, but the highest the county has ever seen in one day is 14.

The investigative report illustrates this problem by showing real footage of a worried mother calling 9-1-1 after finding her 26-year-old son unconscious in his bedroom. The video shows the responding medics, who happened to have body cameras on during the call, fighting to save the man’s life with naloxone. He was revived about one minute after being given the opioid-blocking shot.

Both the man and his mother agreed to release the footage to reporters in order to spread awareness about the seriousness of drug abuse. The grim footage serves as an eye-opening look into how close these patients can be to death, and how hard EMTs and paramedics are working to save their lives and combat addiction.

We give a thumbs up to the local EMS agency for partnering with reporters to show the harsh reality of the heroin epidemic that’s sweeping not only West Virginia, but much of the country. We also give a thumbs up to the involved family for sharing their experience in an impactful way that will hopefully deter others from abusing drugs themselves.

What if one division could help lower ED readmission rates, reduce the time patients stay at the hospital and help treat more people? It might sound impossible, but to 34-year-old physician assistant Brett Feldman, it’s just another day at work.

On a typical day, Feldman will visit soup kitchens, shelters and tent cities to check on patients who were recently hospitalized. He shares resources with them on living well and reentering the workforce, and sees about 100 patients per month.

Street medicine is all about delivering primary and preventative care to a population that’s typically admitted to an ED more often, and for longer periods of time. But with Feldman’s incredible work, the street medicine program has been able to drive down 30-day readmission rates from 51% to 13%. His efforts have also led 73% of local homeless people to get insured, up from only 24%.

We give a thumbs up to the Feldmans and to the Lehigh Valley Health Network for making impressive progress toward helping those in need. It’s this type of awesome work that keeps the homeless healthy and out of EDs and ambulances unnecessarily.