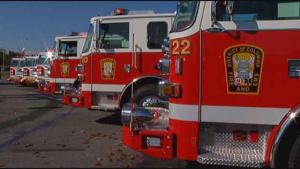 A year ago, the D.C. Fire and Emergency Medical Services department was an agency in crisis, beset by poorly maintained equipment, burned-out paramedics and fiery labor disputes. And that was before a 77-year-old man died in January after collapsing across the street from a firehouse whose personnel did not respond to cries for help.

Mayor Vincent C. Gray (D) tried to portray a different department at a news conference Wednesday – one with a bevy of new equipment and recruits ready to hit city streets.

But with Gray’s successor, Muriel E. Bowser, less than two months from taking office, key questions remain. First among them: Who will lead the department?

Since the July departure of Chief Kenneth B. Ellerbe, an intense and divisive leader who stoked tensions with his workforce, the D.C. Council and members of the public, the tenor of the department’s internal and external relations has markedly improved.

Many credit the leadership of interim fire chief Eugene A. Jones, who has stepped back from a controversial proposal to change firefighter shifts while also continuing to address equipment problems and paramedic shortages. Jones said Wednesday that he would be interested in continuing under Bowser.

Bowser, however, has indicated in her policy platform and public statements that she intends to search nationwide for a chief with a “strong EMS background” to make improvements in the aspects of emergency service that account for the vast majority of calls.

It’s unclear whether Jones, a Washington native who spent 25 years in the Prince George’s County fire department, fits that bill. But he gave assurances that the current department leadership was up to the job.

“The brain trust that is being invested in here now will be able to carry the fire department,” Jones said Wednesday. “I don’t get into other people’s doubts about the service; that’s not my role.”

Gray said he hoped the next fire chief “would be somebody who understands both of those key functions [fire and EMS] and would be able to manage the people in both of those areas.”

Ed Smith, president of the union representing rank-and-file firefighters, said he has “no complaint” with Jones. But he stopped short of saying that he would be worthy of the permanent job.

“I think there still should be a nationwide search that should be aboveboard,” he said. “But I’m not saying that to preclude Chief Jones. He should absolutely be considered.”

Other crucial areas remain in flux. Nearly a year after the department put 30 new ambulances on the street, equipment continues to be a concern.

Wednesday’s news conference took place before a fleet of six new fire engines, recently delivered and under testing. Four more pumpers are set to be delivered before year-end.

Meanwhile, the state of the city’s fleet of ladder trucks is considerably bleaker. Seven trucks were pulled out of service in September, and they await repair – leaving the department without reserves and reliant on mutual-aid agreements with other departments in case a truck cannot respond to a fire.

Jones said two trucks, purchased from other departments, will arrive in the coming weeks, and five new trucks are set to go into service early next year. But he said that equipment-wise, the department still has considerable catching up to do.

A seven-figure contract to refurbish the trucks pulled out of service in September, he said, is pending. Even then, he said, “It’s going to take time” to restore a full complement of reserve units.

“We’ve had this huge hole, and we’re trying to dig our way out of it, and that’s not going away anytime soon,” Smith said. “Once we get back up to par, it’s going to be about staying on a strict replacement schedule.”

Wednesday’s event also highlighted two matters of personnel policy that have proved to be troublesome for the department.

The exception to that hiring policy has been paramedics. For years, the department turned away from hiring “single-role” paramedics, preferring to recruit paramedics also willing to be trained and certified as firefighters. That move was meant in part to break down a cultural divide within the department between fire and medical personnel.

But last year, faced with a growing shortage under Ellerbe, the department again started recruiting single-role paramedics. Those efforts continue, Jones said Wednesday, with 22 such hires.

Bowser has not specified where she stands on the single-role vs. dual-role debate but said in her platform that she would “prioritize the hiring, training and career development of skilled emergency service professionals.”