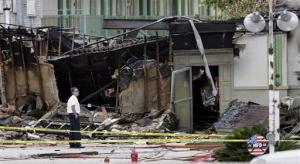 HOUSTON (AP) – A Houston firefighter injured in a restaurant and motel blaze that killed four of his colleagues remained in critical condition Sunday.

Houston Fire Department spokesman Jay Evans said in total three firefighters were still hospitalized on Sunday following Friday afternoon’s collapse, which turned out to be the deadliest in the department’s 118-year history.

Evans said the two other firefighters who remained in the hospital were in good and stable condition.

Fire officials said Saturday they had aggressively fought the fire because they feared people could be inside the motel.

The Houston Fire Department Arson Division is taking the lead in the investigation of the fire, with assistance from the State Fire Marshal’s Office, the Bureau of Alcohol, Tobacco, Firearms and Explosives and the Houston Police Department.