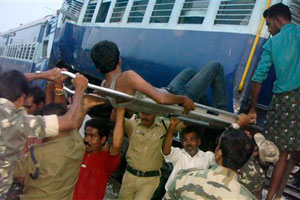 Rescuers worked for about six hours to pull some 70 survivors from the twisted and smoldering wreckage near the southwestern border of Andhra Pradesh state.

“When the train stopped with a loud bang, I got down to see burning passengers crying for help,” Munijayendra, a 25-year-old marketing executive who goes by one name, told Press Trust of India. “The worst part is we were helpless, as the heat was just unbearable.”

At least 40 people were hospitalized with injuries, with about 10 in critical condition, local police chief Charu Sinha said.

The driver of the Hampi Express, upon seeing the cargo train stopped on the tracks ahead, slammed on the emergency brakes, which caused four cars of the Express to derail, officials said.

The first passenger car caught fire, burning to death 16 people who were inside, Sinha said.

“We are trying to identify the bodies and will hand them over to the families,” district official Durga Das said.

Firefighters and police put out the flames within three hours. Railway Minister Mukul Roy ordered an investigation, while officials said they were looking into whether the driver may have missed a signal or if the signal had malfunctioned.

“It seems that the driver of the Hampi Express overshot the signal,” railway spokesman Anil Saxena said in Delhi. The driver and his assistant were among those hospitalized and had not yet been questioned by authorities.

Some of the victims were women and children, though most were construction workers traveling from the towns of Bellary and Hospet in the neighboring state of Karnataka to that state’s capital of Bangalore, police official Harinath Reddy said. The route of the Hampi Express crosses back and forth between Andhra Pradesh and Karnataka.

The collision took place at a station near Penukonda, about 170 kilometers (105 miles) north of Bangalore.

Karnataka’s chief minister, Sadananda Gowda, said relatives of the victims would be given 100,000 rupees ($1,800) in compensation.

Railway accidents are common in India, which has one of the world’s largest networks and serves some 20 million passengers a day. Most collisions are blamed on poor maintenance and human error.

In March, a train plowed into an overcrowded minivan on its tracks and killed 15 people in the minivan in the northern state of Uttar Pradesh.

A month earlier, a train derailed after hitting a bulldozer in the northeast state of Assam, killing three train passengers and injuring 16.

A collision in January between a passenger train and a freight train in northern Jharkhand state killed five people and injured nine.