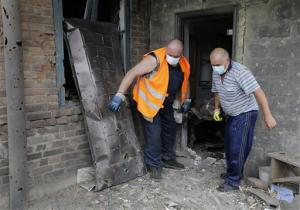 Pro-Russian supporters in eastern Ukraine are preventing civilian casualties getting help because they are threatening doctors, hijacking ambulances and looting medical equipment, according to Human Rights Watch.

“The pro-Russian insurgents’ attacks on medical units and personnel are putting sick and vulnerable people and those who care for them at risk,” said HRW’s Yulia Gorbunova in a statement.

“This appalling disregard of people who are sick or wounded can be deadly and needs to stop immediately,” the representative of the New York-based group said.

Pro-Russian rebels have positioned high numbers of fighters around hospitals and have taken control of wards in at least two hospitals so that their fighters can be treated, HRW said.

That has increased the likelihood of hospitals becoming targets, it said, adding two medics had been killed by Ukrainian rockets or mortars fired from government positions at five hospitals in rebel-held territory.

UN figures estimate around 1,150 people have been killed and around 3,450 injured since fighting over Crimea started in April, with more than 100,000 fleeing to other parts of Ukraine – Russia says 500,000 have crossed over its border.

The Red Cross has defined Ukraine as being in a civil war, meaning all parties in the conflict could be liable for prosecution for war crimes.

Water, electricity and food are in very short supply in besieged rebel-held cities and fuel supplies have also been restricted, making it harder for the already overstretched medical services to reach injured civilians.

HRW’s claims came as Ukraine said its forces were closing in on the main rebel-held bastion of Donetsk and urged rebels to allow civilians to leave.

Meanwhile, more remains from the downed MH17 plane have been flown to the Netherlands for identification, with Malaysian experts joining the Dutch and Australian investigations at the site of the July 17 crash.