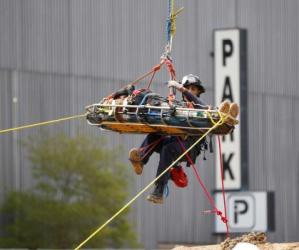 HOUSTON (Houston Chronicle) – A worker was rushed to the hospital after he fell about 20 feet from a raised platform at a construction site downtown.

The incident happened about 9:20 a.m. on Travis just east of Main Street, according to the Houston Fire Department.

The man was on the base of a high-rise construction crane when he fell off, landing about 15 feet to 20 feet below, said HFD District Chief David Swanson.

Swanson said the man was conscious and talking as paramedics reached him. Firefighters strapped him into a Stokes bakset and raised him out of the construction zone. Then they put him on stretcher, loaded him into an ambulance and rushed him to a nearby hospital. Details of his possible injuries and condition were not released.

Traffic was briefly snarled near the construction site as crews cleared the scene.