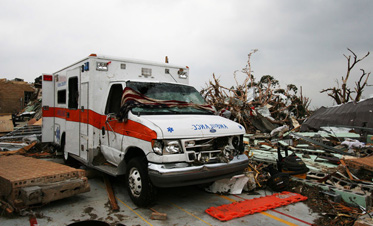 You may have heard about some of the weather issues we’ve had in Kansas this year. Certainly the tornado that quite literally wiped out the town of Greensburg got national attention. But no less difficult for us, though probably less heard of in the rest of the nation, was one of the most severe ice storms on record this past winter and floods involving 12 counties in Southeast Kansas that left hundreds homeless. In fact, of the 105 counties in our state, only three have escaped being declared a state or federal disaster area during 2007. And it’s still only October.

I was reflecting on this fact with my colleague, Major General Tod Bunting, Adjutant General of the Kansas National Guard and Director of the Kansas Department of Emergency Management. General Bunting has consistently supported our efforts in public health preparedness, and has also introduced me to the coffee shop behind the local Harley dealership. (He rides a Roadmaster with a helmet). Musing over the events of the past few months, I remarked, “You know, between tornadoes and floods, it’s enough to make you believe in global warming.”

I probably misspoke to the general. A friend of mine who’s a professional meteorologist recently explained the difference between weather, which is what’s happening right now, and climate, which is the long-term pattern of weather measured over time. (The difference explains why it’s not an inherent contradiction to have an ice storm in the midst of global warming.) But given the level of public health response to these emergencies, it reinforced in me the need to think about climate change not just as a resident of this planet, but as someone who should be interested in what effect climate change actually has on health.

Climate change is a hot topic (pun intended) in public health circles, although one in which the science is still in a very early stage. Several national public health organizations have already released position statements on the potential health effects of climate change, and both the EPA and the CDC (despite the best efforts of the current Administration) are also on board in trying to determine the health community’s best response to climate change. The problem is, while the science of climate change is well known, the health links are mostly theoretical.

It should be noted that they are “theoretical” not because they can’t or won’t happen, but because global warming, science-based weather monitoring and population health statistics haven’t been in play long enough for us to make any definitive links. In many ways, it’s analogous to emergency planning; you know something’s probably going to happen, but because incidents are so infrequent you can’t put together any reliable data on when, where and how they occur.

The health effects of climate change are predicted to occur in five main clusters. The first are the direct temperature effects related to heat. We’re all familiar with heat emergencies and those who are at highest risk. As global warming quickens, average temperatures will rise and set new summertime records with an accompanied rise in heat-related morbidity and mortality. The effect is anticipated to be worse in urban areas, which function as “heat islands” due to the more intensive production of CO and other greenhouse gases within the built environment. Given the aging population and the fact that the elderly are often on medications that raise their risk of heat illness, may be immobile and unable to seek shelter in cooler areas, and often live on a fixed income, which may result in problems paying for air conditioning in the face of rising energy prices — well, you get the picture.

(Interestingly enough, while we’re concerned about the effects of heat, it’s fascinating to note that in the millions-of-years-at-a-glance view of meteorologists, we’re actually still in an ice age. By definition, an ice age occurs when there are sheets of ice in both the Northern and Southern hemispheres. We still have them at the North and South Poles. What we commonly think of as an ice age is a cooler part of an actual ice age called a “glacial;” warmer intervals during a true ice age, like we have today, are termed “interglacials.” Use this sometime at a cocktail party and see what happens.)

A second area of concern is that global warming and climate change may result in an increased frequency of extreme weather events, such as floods and hurricanes. The trauma injury and death issue here is obvious. What is often less expected is the possibility of increased rates of infections (from unprotected exposure to flood waters, for instance), mental health issues and decreased access to medical care resulting from disaster-related loss of income or displacement.

“Climate-sensitive diseases” may also rise as global warming continues. These diseases are (I think) better called “vector-borne” disease. They are the illnesses carried to us by other organisms, such as malaria and yellow fever that are transmitted through mosquito bites. As global temperatures rise, so do patterns of humidity and precipitation. The world becomes more moist and humid, and the range of the mosquitoes carrying disease expands to put new populations at risk. (There’s a reason why these are called “tropical diseases.” It’s a problem if everyplace becomes the tropics.)

Air quality is also expected to suffer as excessive heat increases the frequency of smog events and promotes increases in particulate air pollution from soils, dusts and wildfires. These factors can exacerbate pre-existing respiratory disease and may cause direct damage to lung tissues. Other health linkages are less direct, but are nonetheless intriguing. For example, climate changes can affect agricultural yields. This is a key issue in Kansas, where water supplies are scarce to begin with and will only continue to decrease as global warming heats up. While Midwestern farmers will suffer, the effect of the meager yields on the food supply of developing, equatorial nations will be nothing short of catastrophic.

So what’s the connection to EMS? It’s that each of these potential effects of climate change has implications for prehospital care, whether in planning, response or prevention. Admittedly, it’s going to be hard to get people to think about how EMS should encounter these issues. We’ve been talking about an impending pandemic flu for the past several years, and it’s still difficult to get community leaders to plan accordingly. It’s related to the concept of the “imminent threat,” where the things you think have the greatest chance of occurring soonest are the ones you think about. (This is why there are volumes of plans for managing the celebration when the University of Kansas finally wins another NCAA basketball title, but absolutely none for when KU wins out in the BCS.) Even in our daily lives, we think in limited timeframes. EMS workers talk in terms of shifts; administrators frame their lives by reporting periods and budget years. Politicians and policy makers think in two- or four-year election cycles. Retirement plans are keyed to 20 years on the job, and even our bank mortgages are often limited to 30 years. It’s no wonder it’s hard for us to consider a problem that may not show its effects for a half-century or more, let alone to try to do something about it.

And why should we? A vocal minority of those who accept that global warming occurs continue to deny the human role in it. Given that climate change occurs naturally, how much of it is really our fault? And can we predict the magnitude of the health effects of climate change? Maybe we re just making noise in the dark because it’s less scary that way.

To me, the issue here is not about assigning culpability or “playing the numbers.” The two actors here are Mother Nature and human beings. The former has been alternately warming and cooling the earth for eons. We’ve only been here for a while, but our presence does seem to have accelerated the pace of change. There’s no way to express that as a percentage of guilt, but the scientific evidence is pretty clear that CO production from human activity is doing something. So in my mind, I look at addressing climate change as a risk management activity (or, more personally, as a reflexive response to the hint of guilt). Since we can’t quite tease out if global warming is our fault or not, best assume that it is, and fix what we can.

That being said, I do believe that all of us need to do our part. The wisp of air from the wings of a butterfly can affect events half a world away. (Okay, I don’t actually believe that, even if the butterfly in question was actually Mothra, but I can’t avoid the clich ). So while I would tell you to change the light bulbs in the station to the compact fluorescent kind, and to not idle your rig for more than 30 seconds at a time and to purchase hybrid vehicles, it’s not simply because it’s the good and right thing to do. I’m asking you to do it to make life easier for the two or three or more generations of EMS and emergency care providers who come after us. With the aging population, they’re already going to have their hands full carting you and me back and forth from the nursing home. Don’t make them transport us for heatstroke as well.

(Editor s Note: For more information on the EMS response to the tornado that wiped out the town of Greensburg, check out “Good Neighbors in Kansas” on p. 98 in July JEMS.)