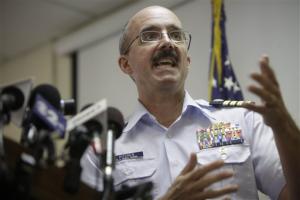 NEW YORK (AP) – Hoax emergency calls like the one about a yacht explosion off New Jersey cost U.S. taxpayers millions of dollars a year, yet authorities who police the nation’s coastlines acknowledge there’s little they can do to prevent them.

Monday’s search operation about 20 miles (30 kilometers) off Sandy Hook took about five hours and cost rescue agencies, including the Coast Guard, more than $300,000 by the time authorities decided the person who reported the emergency had made it up.

The caller said in a calm, clear voice that “we have three deceased, nine injured” aboard a sinking yacht called the Blind Date after an explosion on board. He said that he was calling from a solar-powered radio and that “we have 21 souls on board, 20 in the water right now.”

The call made immediate national news and sent Coast Guard vessels and New York City police helicopters scrambling to search for people and wreckage, only to turn up nothing.

From the Canadian border down to Sandy Hook alone, the Coast Guard received 300 suspected hoax reports last year. Officials have to take such calls seriously, especially those like Monday’s, which contained minute details, authorities said.

With other hoax calls, “you can tell immediately they’re from children,” Capt. Gregory Hitchen, deputy commander of the Coast Guard in New York, said at a news conference Tuesday. “This one was somewhat calm but was giving a convincing story as to what the nature of his emergency was.”

Making a false call is a federal felony, with a maximum penalty of six years in prison, a $250,000 fine and reimbursement to the Coast Guard for the cost of performing the search.

Last month in Texas, the Coast Guard launched a search for six people reported missing in the Gulf of Mexico, two days after a mayday call saying they were abandoning their sinking fishing boat in the waters off Galveston. Crews searched more than 2,800 square miles (7,250 square kilometers) but found nothing.

In 2010, a man pleaded guilty to making a distress call in Winthrop Harbor, Massachusetts, reporting a vessel was sinking with four people aboard. The fruitless search cost almost $56,000, and the caller’s sentence included payment of that amount, plus three months in prison and two years of supervised release.

The Coast Guard and other state and local agencies responded to more than 60 suspected hoax calls last year in the northern New Jersey, New York City and Hudson River region. The maritime agency conducted about a half-dozen criminal probes, resulting in no prosecutions, authorities said.

The Coast Guard has a new command, control and communications network called Rescue 21, which aims to reach mariners in distress but also zeroes in on fake reports. The system operates on a very high frequency, which will provide for clearer playback of distress calls, including hoaxes.

But “we hope that informing the public about the dangers of hoaxes will keep people from making the calls,” Coast Guard spokeswoman Jetta Disco said.

On Monday, at least two calls came in a radio transmission after 4 p.m. from someone on land in New Jersey or southern New York, possibly New York City’s Staten Island borough, on a channel not typically used for emergencies, Hitchen said.

The man claimed that the yacht had sunk but that everyone had made it to life rafts. The vessel, he said, was taking on water.

The caller said his group didn’t have a handheld radio or flares in the dinghy to communicate with rescuers.

On land, authorities had set up casualty staging areas in Newark and Sandy Hook, staffed by 200 first responders including police, fire and other emergency personnel, something New York police Commissioner Raymond Kelly said turned out to be a “terrible waste of resources.”

Crews said they found no sign of any people or debris.

Total aircraft and boat costs for the Coast Guard part of the search are estimated at more than $318,000, Disco said on Tuesday evening. That amount does not include the cost of triage and ambulance stations along the shoreline.

And that’s just for one operation. With hundreds of responses to hoaxes describing emergencies both large and smaller, Disco said the national financial losses for futile searches easily amount to millions of dollars.

“False distress calls like this tie up valuable assets like helicopters and boats and put our crews at risk every time since we take every distress call seriously,” he said in a statement late Tuesday. “And they impede the ability of first responders like the Coast Guard and our partners to respond to real distresses where real lives may be in genuine peril.”

A criminal investigation is under way, and authorities are offering a $3,000 reward for information leading to a prosecution. There were “no definitive leads” as of Tuesday, Hitchen said.