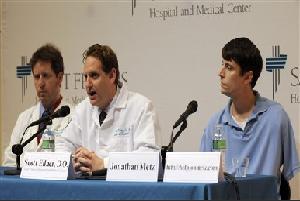 HARTFORD, Conn. – Jonathan Metz had his left arm stuck in his furnace boiler for about 12 hours when he asked himself “what would MacGyver do?” and concluded that amputating the limb was his only chance for survival.

The 31-year-old West Hartford man, who was released from the hospital Monday, met with reporters Tuesday for the first time since getting his arm stuck in his furnace for two days and nearly cutting it off.

Metz, who is right-handed, said when the thought of amputation first crossed his mind he pushed it away. He considered every other option and thought of the resourceful 1980s television character who always found a way to use mundane objects in his surroundings to get himself out of tough situations.

“I definitely dithered for a few hours after coming up with the initial idea,” he said. “I thought there must be some other way, so I kind of started looking around my surroundings again. Maybe there was something I missed. You know, what would MacGyver do if he were here?”

Metz said he spent six hours psyching himself up for the self-amputation. He tried to yank the arm out, he used dirty oil from a catch basin to try to grease it and finally he looked to his tool box, which he had within reach.

His fantasy, he said, was that he could cut off the arm, run upstairs and put it in his freezer, call 911, then go to the hospital and get it reattached.

Metz said he first used a hacksaw blade, then used a larger blade, which he hoped would make the operation go smoother. He nearly succeeded but couldn’t make it through a bundle of nerves.

“I don’t know how many strokes it took,” he said. “But it was quite a few. So yes, every one, I was re-evaluating in some way, was it too late to stop? Or what was the point where there was no going back?”

Metz, who lives alone, revealed Tuesday that the ordeal began after work on Monday night, June 7, not the day before, as doctors previously had said.

He had been trying to clean off the heating vents on his furnace boiler when he dropped either a brush or a Shop-Vac attachment. He was reaching in to retrieve it when his arm became stuck between the funnel-like fins of the boiler.

When he tried to pull it out, the fins tightened on his arm, cutting into it. The more he would struggle, the more it would cut, and the more his arm would swell.

“It very quickly became apparent to me that I had a major problem,” he said. “I basically spent the next 12 hours screaming for help.”

Eventually, he began noticing signs of infection and the smell of rotting flesh, and he starting thinking he had to cut the arm off. Doctors said the partial self-amputation prevented the spread of the infection to the rest of his body and saved his life.

Metz started and stopped a couple times, once when the blood flow became too much. He said he had to use a telephone cord to fashion a second tourniquet, replacing the one he had made with his shirt. He said he used his mouth and neck to pull the cord tight around the arm as he cut.

When he realized he couldn’t get the arm off, he leaned against a wood pile, tightened the tourniquet again and resumed calling for help.

Every five minutes, he said, his microwave would beep, reminding him that the leftovers he had been reheating for a late-night snack were ready. He said the chirps tortured him at first, but they later became a source of strength, telling him he had made it through another five minutes.

He made one final thrust at the boiler and was able to open its release valve, sending a brackish, rust-colored water onto the floor. He scooped it into his mouth with a flip-flop he had been wearing.

“It was just enough to at least mentally make me feel like, here’s a way out of this,” he said.

He said thoughts of his fiancee, family, friends and his little beagle, Portia, also kept him going.

Friends and coworkers at The Travelers, where Metz works in financial services, grew worried when he did not show up for work Tuesday and missed a softball game.

When Metz did not answer the doorbell at his home Wednesday, June 9, a friend called police, who found Metz in the basement.

Firefighters ripped apart the furnace with heavy tools, including a spreader normally used to take the door off a car. Once they did, the arm just gave way.

His doctors said Metz is doing well. They hope to fit him for a prosthetic arm in the next month.

The family has set up a website – http://helpjonmetz.com – to collect donations to help pay the costs that insurance will not cover.

Metz said he is not feeling sorry for himself. He plans to get married, eventually go back to work, back to playing softball, back to his hobby of building furniture. There will be no more procrastinating, he said.

“In the short term, it’s going to be difficult,” he said. “But in the long term, boy if you need a kick in the pants to get you to tackle, take on those dreams or whatever your aspirations are, this was it.”