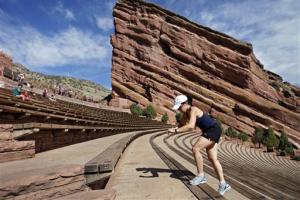 DENVER (AP) – Denver officials insisted Monday that the iconic Red Rocks Amphitheater is safe after rocks fell on concertgoers, injuring seven people and sending four of them to the hospital.

Witnesses told KMGH-TV (http://bit.ly/o5opZC ) that rocks rained down on people sitting near the front left side of the stage during a concert, injuring some severely on Sunday. A spokeswoman for West Metro Fire Rescue said the names of the victims and extent of the injuries were not immediately available.

The naturally formed amphitheater tucked in the foothills west of Denver has two, 300-foot sandstone monoliths, dubbed Ship Rock and Creation Rock. A half dozen or more rocks fell from Creation Rock on the north side of the theater.

The stage has served as a venue for top-flight performers, ranging from the Beatles to John Denver. Former President George Bush and other politicians made campaign stops there, and it has been the backdrop for a number of movies.

Denver cultural affairs spokeswoman Kristin Rust said investigators may never know what caused rocks to fall on spectators around 1 a.m. Sunday during the last segment of a concert by the band Sound Tribe Sector 9. Some witnesses reported seeing people climbing on the rocks before the incident.

“At this point, we still do not know what cause it, human or nature,” she said.

She said about 100 staffers, including security, medical attendants and police, attend major events at the venue. She said more security officials will be assigned to the monoliths for the rest of the year, and her department will see if more permanent changes are needed next year.

Yenter Companies, a contractor that specializes in drilling, blasting, rock and soil stabilization, has been called in to inspect the rock formations.

On Monday, tourists and joggers roamed the facility, despite the yellow crime tape that blocked off stairways closest to the rocks.

Rust said a number of people have been injured or killed climbing rocks in the park outside the amphitheater, but this is the first time in at least 23 years that anyone can remember injuries caused by falling rocks inside the venue.