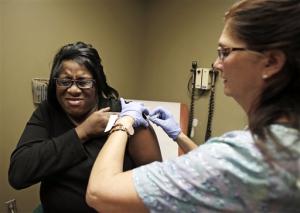 WASHINGTON (AP) – Nearly half the 70 employees at a Ford dealership in Clarksville, Ind., have been out sick at some point in the past month. It didn’t have to be that way, the boss says.

“If people had stayed home in the first place, a lot of times that spread wouldn’t have happened,” says Marty Book, a vice president at Carriage Ford. “But people really want to get out and do their jobs, and sometimes that’s a detriment.”

The flu season that has struck early and hard across the U.S. is putting businesses and employees alike in a bind. In this shaky economy, many Americans are reluctant to call in sick, something that can backfire for their employers.

Flu was widespread in 47 states last week, up from 41 the week before, the Centers for Disease Control and Prevention said Friday. The only states without widespread flu were California, Mississippi and Hawaii. And the main strain of the virus circulating tends to make people sicker than usual.

Blake Fleetwood, president of Cook Travel in New York, says his agency is operating with less than 40 percent of its staff of 35 because of the flu and other ailments.

“The people here are working longer hours and it puts a lot of strain on everyone,” Fleetwood says. “You don’t know whether to ask people with the flu to come in or not.” He says the flu is also taking its toll on business as customers cancel their travel plans: “People are getting the flu and they’re reduced to a shriveling little mess and don’t feel like going anywhere.”

Many workers go to the office even when they’re sick because they are worried about losing their jobs, says John Challenger, CEO of Challenger, Gray & Christmas, an employer consulting firm. Other employees report for work out of financial necessity, since roughly 40 percent of U.S. workers don’t get paid if they are out sick. Some simply have a strong work ethic and feel obligated to show up.

Flu season typically costs employers $10.4 billion for hospitalization and doctor’s office visits, according to the CDC. That does not include the costs of lost productivity from absences.

At Carriage Ford, Book says the company plans to make flu shots mandatory for all employees.

Linda Doyle, CEO of the Northcrest Community retirement home in Ames, Iowa, says the company took that step this year for its 120 employees, providing the shots at no cost. It is also supplying face masks for all staff.

And no one is expected to come into work if sick, she says.

So far, the company hasn’t seen an outbreak of flu cases.

“You keep your fingers crossed and hope it continues this way,” Doyle says. “You see the news and it’s frightening. We just want to make sure that we’re doing everything possible to keep everyone healthy. Cleanliness is really the key to it. Washing your hands. Wash, wash, wash.”

Among other steps employers can take to reduce the spread of the flu on the job: holding meetings via conference calls, staggering shifts so that fewer people are on the job at the same time, and avoiding handshaking.

Newspaper editor Rob Blackwell says he had taken only two sick days in the last two years before coming down with the flu and then pneumonia in the past two weeks. He missed several days the first week of January and has been working from home the past week.

“I kept trying to push myself to get back to work because, generally speaking, when I’m sick I just push through it,” says Blackwell, the Washington bureau chief for the daily trade paper American Banker.

Connecticut is the only state that requires some businesses to pay employees when they are out sick. Cities such as San Francisco and Washington have similar laws.

Challenger and others say attitudes are changing, and many companies are rethinking their sick policies to avoid officewide outbreaks of the flu and other infectious diseases.

“I think companies are waking up to the fact right now that you might get a little bit of gain from a person coming into work sick, but especially when you have an epidemic, if 10 or 20 people then get sick, in fact you’ve lost productivity,” Challenger says.