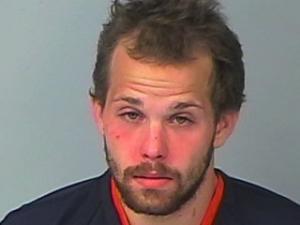 BROOKSVILLE, Fla. – After playing a game of “manhunt” in his Shady Hills neighborhood, detectives say Darryle Cockefur cut his hand on barbed wire and was taken to the hospital. It was what they say he did at the hospital that landed him in jail.

Cockefur was taken to Oak Hill Hospital by Pasco County Fire Rescue just before Thanksgiving weekend. Detectives say during the transport he tried to swing his cut hand toward the firefighter causing blood to get on James Wolski’s face, neck, clothing, arm, shoes and left eye. Deputies said Cockefur wailed his hand around on purpose causing blood to fly around. They say Cockefur did not cooperate and continued to be combative. He yanked out the stitches to his hand.

First attempts to treat Cockefur were unsuccessful. He was first taken to Bayonet Point Emergency room but due to his behavior was released without treatment. He was turned away from Spring Hill Regional Hospital since he did not have insurance.

After he was medically cleared from Oak Hill Hospital, Cockefur was taken into custody. It was learned that Cockefur was under the influence of prescription drugs and marijuana. He was held under $5000 bond in the Hernando County Jail.