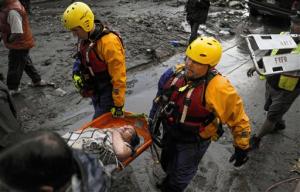 DENVER (AP) – A woman who was reported missing after a mudslide and flash flood that killed one person has been found safe, police said Monday.

The mudslide and flooding struck Friday after about 1.3 inches of rain fell in an area above Manitou Springs that had been burned by the Waldo Canyon Fire last year. The fire destroyed 347 homes, killed two people and burned more than 28 square miles.

El Paso County sheriff’s deputies said John Collins, 53, of Teller County, was killed by the mudslide, which slid onto U.S. 24.

Collins was found buried beneath debris outside his vehicle. It was unclear if Collins left his vehicle on his own or if the debris and water forced him from it.

The area got more rain Monday, but there were no reports of serious damage.

Laura Hunter, who survived getting swept away by flood waters, recounted her narrow escape Monday.

“I lost everything, but I survived it,” Hunter said at a hospital news conference. “I’m so happy I survived.”

Hunter said she was at home when water started coming in her living room window. She said she went to the front door, thinking she would head to higher ground, but was swept away by the flood. She was able to grab a tree, fling herself onto a ridge and crawl to a safer spot. Neighbors wiped mud from her face and called for paramedics.

Hunter said her rented home was washed away, but a firefighter returned her ID and bank cards that someone had found. A friend salvaged her bicycle.

“My long-term goals are just to be really grateful for my life, and I want to form really, really, really healthy relationships. That’s the most important thing to me now,” she told reporters at Penrose Hospital in nearby Colorado Springs. She was being treated for a broken leg and other injuries.

There had been confusion about whether Hunter was the person believed to be missing, but that apparently sprang from initial reports that the missing woman was also clinging to a tree, Buckmiller said.

Buckmiller said the missing woman was not in a tree. It wasn’t clear where that apparently inaccurate information came from.

Two other people who were initially unaccounted for were found safe.

At least 20 cars were swept away by Friday’s floods.

Kathryn Presnal, of Cascade, told The Gazette she got out of her Nissan Versa and scrambled up a cliff, stopping to help another driver stranded by the flood.

“I grabbed her hand and pulled her up,” said Presnal, a school principal in Colorado Springs. “We stood there and watched our cars float away.”

The mudslide destroyed six houses and damaged more than 30 others, said Hunting, the police spokesman.

He said the city, county and U.S. Forest Service were trying to blunt the effects of flooding after the wildfire with several steps, including the construction of basins in the burn area to catch sediment.

“With the amount of rain that we received Friday, nothing that we could have done could have prevented the kind of flooding we had,” Hunting said. “Just Mother Nature doing her thing.”