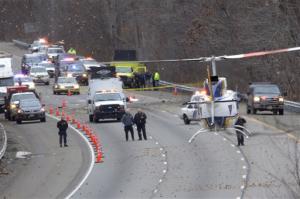 HARDING, N.J. (AP) – A small plane headed for Georgia crashed Tuesday on one of the New York City area’s busiest highways, spiraling out of control and losing a section of the aircraft before hitting the wooded median strip and exploding, sending debris across the roadway. All five people aboard were killed, but no one on the ground was injured.

The New York investment banking firm Greenhill & Co. said two of its managing directors, Jeffrey Buckalew, 45, and Rakesh Chawla, 36, as well as Buckalew’s wife and two children, were on the plane that crashed on Interstate 287.

Buckalew was the registered owner of the single-engine plane and had a pilot’s license.

Wreckage was scattered over at least a half-mile-wide area, with a section found lodged in a tree of a home about a quarter-mile away, near a highway entrance ramp.

Helicopter footage from News 12 New Jersey showed charred wreckage stretching across the median and the highway, a heavily used route that wraps around the northern and western edges of the New York City area. A huge ball of charred metal sat in the middle of the northbound lanes. Both sides of the highway were shut down.

Law enforcement officials and firefighters searched the woods in the median Tuesday afternoon.

The Federal Aviation Administration said the Socata TBM-700 turboprop had departed from nearby Teterboro Airport in New Jersey. It was headed for DeKalb Peachtree Airport near Atlanta and was registered to an address on Manhattan’s Upper East Side.

FAA spokesman Jim Peters said the pilot had requested clearance to a higher altitude. He said that garbled transmission followed, and that the plane then dropped off radar.

Chris Covello of Rockaway Township said he saw the plane spin out of control from the car dealership where he works in Morristown, near the site of the crash.

“It was like the plane was doing tricks or something, twirling and flipping. It started going straight down. I thought any second they were going to pull up. But then the wing came off and they went straight down,” he said.

David Williamson, 19, was doing maintenance at a golf course in Morristown when he spotted a plane in trouble, with smoke coming off both sides of the wings.

“It was really scary,” he said.

When the plane crashed, he said, it sent up a “huge plume of thick black smoke.”

Greenhill & Co. said Buckalew’s wife, Corinne, and the couple’s two children, Jackson and Meriwether, were traveling with him.

“The firm is in deep mourning over the tragic and untimely death of two of its esteemed colleagues and members of Jeff’s family,” the company said in a written statement.

Authorities said a dog aboard the plane was also killed.