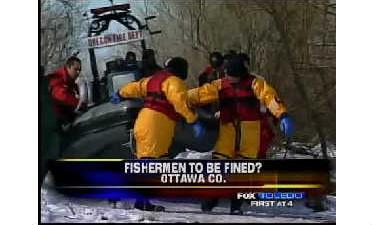 As Lake Erie begins to freeze, Ohio authorities are making changes following last winter’s stranding of 130 fishermen on an ice floe off the Magee Marsh shoreline. The rescue operation cost the Coast Guard more than $245,000 on Feb. 7, after a huge chunk of ice broke away in the lake. More than 20 different agencies were dispatched to help, including Canadian and American rescue teams. Agencies dealt with about $20,000 in costs. Ottawa County Sheriff Bob Bratton says rescues from lake ice will now be coordinated by fire departments, and they will decide whether any fishermen will face civil penalties effectively billing them for the local services. The sheriff’s department will determine whether any criminal charges are in order. Sheriff Bratton said he wants fishermen to be accountable if they choose to go out on the ice, especially in bad conditions. If they do, a lot of lives will be at risk, both fishermen and emergency teams. A Coast Guard spokeswoman says it does not seek to recover costs related to rescues.