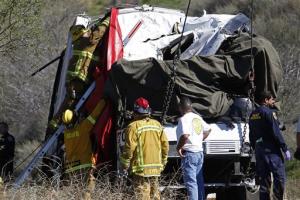 MENTONE – For Todd Beard, the scene of Sunday’s bus crash on Highway 38 near Yucaipa was “chaotic.” What he saw was gruesome, but he had to spring into action.

Beard – a Cal Fire firefighter- paramedic working at the Yucaipa station – was one of dozens of first-responders from several agencies at the crash that killed seven.

“When we first got there … there seemed to be people everywhere,” he said. “It took a few seconds to gather my plan or set in, to get over the shocking factor at first, but then I went to work … triaging people.”

The crash was reported around 6:30 p.m. on a dark portion of the highway.

The bus had collided with two other vehicles and rolled, leaving dozens injured and looking for help.

Beard, 27, described the scene as the worst he had experienced since coming to Cal Fire in 2007.

“My job as the medic on the engine is patient care, and right away, seeing the bus and I believe it was … an off-duty sheriff’s deputy came up, they kind of briefed us right when I stepped off the engine on kind of the magnitude of what it really was. And just that alone was like, ‘Man …’ And I was kind of gathering my thoughts in my head on what I was going to do,” he said.

“As the first medic there, I knew I needed to set up doing triage … and then went to work.

“Just the magnitude of it and the amount of people, it was the worst call that I’ve been on yet – and I hope it is the worst of my career.”

After incidents such as Sunday’s crash, first-responders often seek the help of others to express how they feel.

After going back to their stations, firefighters and police officers, and sometimes dispatchers, talk and allow one another to vent.

Conversations remain private and allow first-responders to hear how their co-workers are doing.

Many agencies seek the help of grief counselors.

Redlands provides its fire and police personnel with crisis- management counseling through The Counseling Team International, a San Bernardino-based company. Its employees can also ask for services through the city’s Human Resources Department.

For 30 years, the business has provided crisis management and has sent counselors to work with agencies after the Sept. 11 terrorist attacks and the Oklahoma City bombing.

“We are on call to be available to them if they are involved in any traumatic event on-duty or off-duty,” she said. “We serve, all together, between 60 to 70 police and fire departments … all Southern California. We are nationwide.”

TCTI works at about 300 calls a year in San Bernardino County, and has worked several since Sunday’s bus crash, Bohl-Penrod said.

“We’ve been working it since it happened,” she said, adding that she could not give a number of how many officers, firefighters or paramedics have been seen. “But I can tell you that there have been several from every agency that we work for.”

In addition to providing counseling and interventions, TCTI also provides peer support training to businesses and to chaplains on how to work with first- responders.

In addition to the grief counseling, Redlands also has volunteer chaplains for both its fire and police departments.

Pastor Jonathan Jarboe of Pathway Church in Redlands is the chaplain for the Police Department.

In addition to his work with Pathway – where he has worked for 20 years – Jarboe also serves as a reserve officer.

He works dozens of incidents per year, and is on call on a 24- hour basis.

He spoke to several officers the evening of the crash and said they were doing well.

He believes that officers often talk to him directly because he can relate to what they go through.

“I think certainly it helps with officers within the department, because I live in their shoes,” he said. “I’ve been out on scenes with (officers), sometimes difficult scenes from car accidents to crises involving kids.

“It’s twofold to help the community and an encouragement to officers so they can have someone to talk to.”