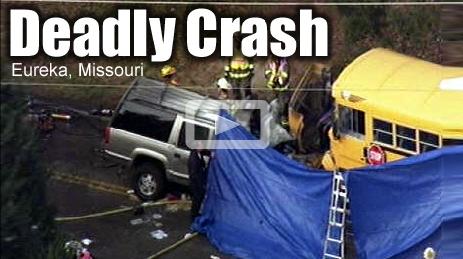 EUREKA, Mo. – A driver of a sport utility vehicle was killed Thursday in a fiery collision with a school bus near St. Louis, slightly injuring five children and the bus driver.

Authorities did not immediately publicly identify the killed driver, who was trapped in the engulfed Chevrolet Suburban after the crash about 8:15 a.m. near Eureka, about 25 miles southwest of St. Louis. The Eureka Fire Department’s Scott Barthelmass said injuries to the bus driver and the students from Geggie Elementary School in the Rockwood School District were not severe. The students were taken to St. John’s Mercy Medical Center for evaluation.