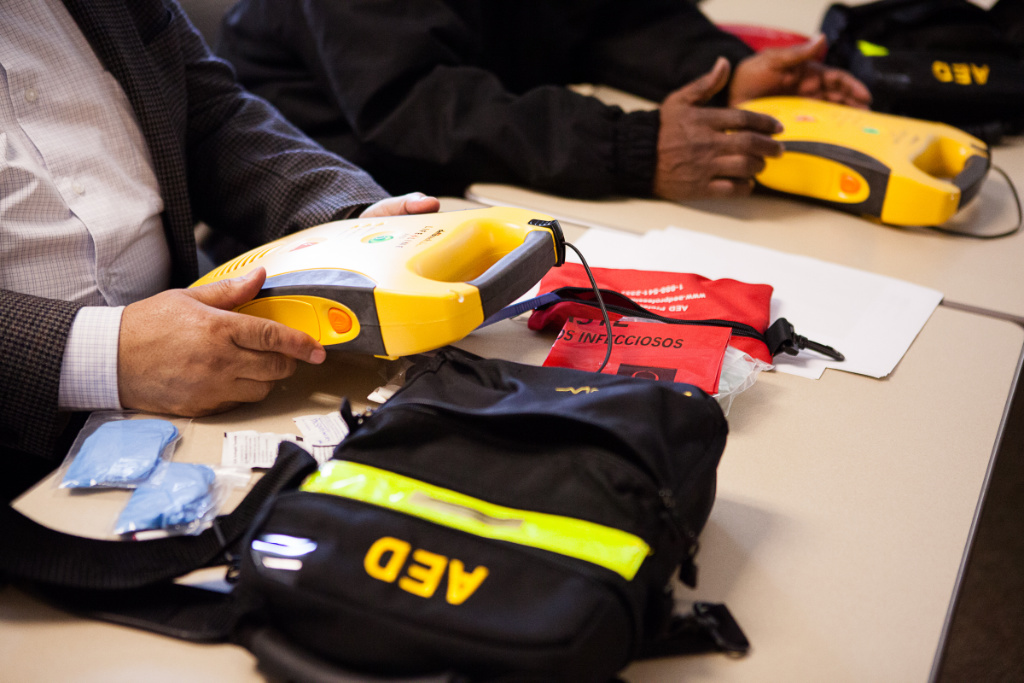 Kevin Volpp’s heart stopped beating while he was eating at a Seasons 52 restaurant, yet he survived after a dinner companion performed CPR and an ambulance crew arrived with an automated external defibrillator — an AED.

But after he recovered, Volpp was dismayed to learn that the restaurant itself was not equipped with such a device. A Penn Medicine researcher who studies heart disease — the very condition that sent him to the hospital — Volpp came to suspect most other restaurants were without the lifesaving technology.

The Inquirer asked the top 12 chain restaurants, as measured by sales in 2019, and none said they had a policy of installing AEDs. Most failed to respond to multiple emails; several said AEDs were installed in restaurants only where required by state or local laws.

Yet such requirements are rare. Pennsylvania, New Jersey, and most other states do not have them. Among the few that do are California and Rhode Island, but only for restaurants with a capacity of 300 and above. That means in nearly every case, restaurant diners who experience a sudden cardiac arrest are dependent upon the prompt arrival of an ambulance with an AED — or on the off-chance that a bystander can find one of the devices in a nearby building.

Told of the Inquirer’s findings, Volpp said there was no reason for a national chain not to install such devices, which start at about $1,200. The top 12 chains each posted 2019 sales above $1 billion, according to FSR magazine, which covers the full-service restaurant industry.

“It’s inexcusable for them not to have AEDs and training,” Volpp said.

Why restaurants? Outside of home and work, they are one of the top places people spend their time. In 2019, people aged 15 and up spent an average of about 20 minutes a day in restaurants or bars, according to the U.S. Bureau of Labor Statistics.

Some states require AEDs at other private businesses and government buildings. New Jersey mandates them at schools, gyms, and nursing homes, and Philadelphia, though it has no requirement, has installed the backpack-sized devices in all city public schools. But nationwide, restaurants are generally not subject to such rules, according to AED Brands, a national distributor that tracks the legislation.

The Sudden Cardiac Arrest Foundation, a nonprofit that advocates for the usage of AEDs, has not specifically pushed for their placement in restaurants. The goal is simply to install the devices in any facility with lots of people, said Mary M. Newman, the group’s president and chief executive officer. Ideally the defibrillators should be located no more than 90 seconds from any spot in a building, meaning a rescuer could get there and back within 3 minutes, she said.

That’s because the chance of death or disability rises with each minute after a person’s heart stops beating. Nine out of 10 people die after experiencing a cardiac arrest outside the hospital — totaling 350,000 deaths each year, according to the American Heart Association. But when bystanders perform CPR and use a defibrillator, the chance of survival approaches 50%.

That’s what happened to Volpp, whose heart stopped beating while he was dining at a Seasons 52 in Cincinnati on July 9. Among his dinner companions was Drexel University squash coach John White, a family friend who was trained in CPR.

When the heart-disease researcher suddenly slumped on the table, White placed Volpp’s motionless body on the floor, rolled him on one side, and checked his airway to make sure it was clear.

Volpp had no pulse and was not breathing, so White performed CPR: sets of 30 chest compressions followed by two quick breaths of mouth-to-mouth resuscitation. (A streamlined version of CPR without the breaths also has been shown to be effective.)

That kept Volpp’s blood circulating until an ambulance crew arrived five minutes later to shock him with an AED. Paramedics needed three tries to restart his heart.

Asked to comment about the lack of an AED at the restaurant, Seasons 52 did not respond. Among the 12 largest chains that the Inquirer asked about AEDs, the following did not respond to multiple requests for comment: Olive Garden, Applebee’s, Buffalo Wild Wings, IHOP, Texas Roadhouse, Outback Steakhouse, Cracker Barrel, and LongHorn Steakhouse.

Cheesecake Factory, Chili’s, and Red Lobster all said the devices were installed where required by law. (Denny’s restaurants are owned by franchisees; a spokesperson was not able to say how many might have defibrillators.)

This Philly teenager’s heart stopped beating, but he survived because his school had an AED

When the ordinance was passed a decade ago, inspectors already were conducting annual fire-safety checks at each location, so it was no trouble to add AED inspections to the process, said Jorge Gonzalez, assistant fire chief of the Davie Fire Rescue Department. Inspectors make sure the devices are charged and do not have expired pads.

At first, some businesses with multiple locations pushed back against the rule, citing the difficulty of training employees at one site but not another, Gonzalez said. But the ordinance is now accepted as part of doing business, and already in at least two cases, an AED has been used to save someone’s life, he said.

Philadelphia has no requirement for private businesses to install defibrillators. But some do so anyway.

One is Pizzeria Vetri, which has AEDs at its Rittenhouse Square and Art Museum locations. The pizzeria’s outpost in King of Prussia mall does not have one, but is located around the corner from a Comcast building that has a device, according to PulsePoint AED, an app that tracks device placement nationwide.

The pizzerias installed the devices because they were deemed “important for safety” and because they are expected to be required at some point, said Larissa Crossley, a spokesperson for Urban Outfitters, which purchased the restaurants in late 2015.

Advocates for AEDs stress that it is not enough simply to install such devices. Training also is important (though a novice can still use one with guidance from an emergency dispatcher), along with awareness of where such devices are placed.

A quick check of the app shows that many malls and shopping areas are equipped with AEDs.

“Even though that restaurant may not have one, right next door there could be one at a fitness club,” Price said.

At Penn Medicine, Volpp has studied other aspects of heart disease, such as how to encourage patients to take cholesterol-lowering medicines. But after his experience with cardiac arrest, he is now looking at ways to tackle that problem, too, such as improving how dispatchers guide bystanders through the use of an AED.

He said he did not want to single out Seasons 52 for criticism, as he suspected (correctly) that its lack of a defibrillator was common.

“It’s more pointing out a general problem,” he said.

And if not for prompt CPR and the swift arrival of an ambulance crew, Volpp said, he would not be here to point it out.

Visit The Philadelphia Inquirer at www.inquirer.com

0
Recognizing common toxidromes will assist your assessment and treatment of the exposed patients, even when the specific toxin is unknown.