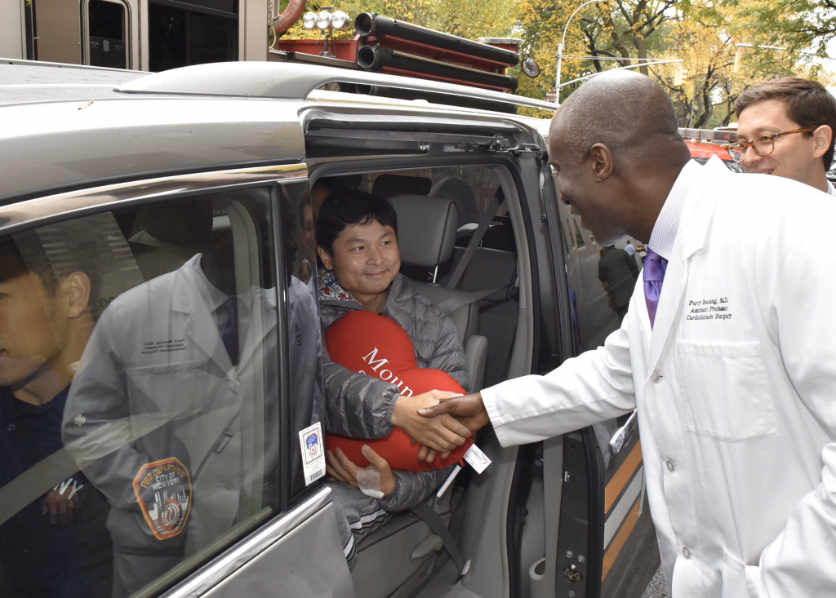 FDNY Lt. Raymond Wang, seated in the car, shakes the hand of a doctor from Mount Sinai Hospital yesterday in Manhattan after being released. (FDNY photo)

NEW YORK CITY — One of the two FDNY emergency medical technicians who suffered separate medical emergencies on the same day was released from the hospital yesterday.

Lt. Raymond Wang left Mount Sinai Hospital as dozens of first responders cheered him on. Wang suffered a tear in his aorta on Oct. 17 when he stopped to help with a crash involving another EMT.

City officials at the time called it a bizarre coincidence.

“1.5 million times a year, the men and women of EMS respond to strangers to save their lives. They bring their healing hands and high level of prehospital care. This time, we got to do that for one of our own. On that crazy day, all of the pieces of the puzzle fit together perfectly,” said FDNY Chief of EMS Operations Lillian Bonsignore.

The other EMT who suffered a stroke, Liam Glinane, remains hospitalized in stable condition.

“EMT Liam Glinane has shown signs of improvement and his spirits are high. He continues to progress and get better every day,” Chief Bonsignore said.

0
Paramedics were hospitalized after their ambulance was struck by a tractor-trailer and overturned.