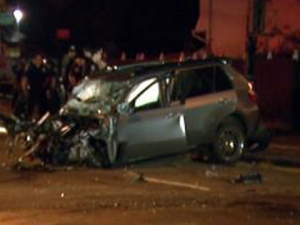 NEW YORK (CBSNewYork) – A horrible crash on Staten Island between a SUV and an ambulance ended tragically Monday night. A BMW SUV traveling northbound on Hylan Boulevard collided head-on with a Staten Island University Hospital ambulance heading southbound just after 7 p.m. in Eltingville, police said. Killed in the accident were the driver of the SUV, who was ejected from the vehicle and pronounced dead at the scene, and the 58-year-old driver of the ambulance.