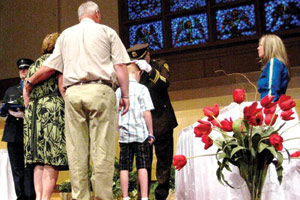 T his month’s column is an important call to action for EMS agencies to support the National EMS Memorial Service and, more specifically, the families of those who have lost their lives while performing EMS duties.

First, let me give you some important background. In 1991, recognizing that EMS lacked a mechanism to recognize and honor those who died performing EMS duties, the Virginia Association of Volunteer Rescue Squads established the National EMS Memorial Service. The first ceremony was held in 1992 in Roanoke, Va.

The memorial service is a carefully planned weekend of events for the survivors of the deceased, including co-workers, to meet collectively, reflect, celebrate the lives lost and continue the healing process.
The first service was so inspirational that word soon spread throughout the country, and additional EMS agencies began to attend and support the memorial service annually. I won’t go into great detail here about this year’s service because we have multiple articles on JEMS.com that describe it, including an article on the outstanding efforts of participants in the National EMS Memorial bike ride program and the Muddy Angels Bike Riders who ride to honor our fallen EMS personnel and draw attention to the memorial service.

What I will tell you is that it’s an inspiring and unforgettable ceremony that should be better attended by EMS agencies and officials to show support for the fallen and their survivors, to reflect on why each person died and to focus attention on how we, as an EMS community, can develop programs, procedures and equipment to avoid unnecessary injury and loss of life whenever possible.

I was asked to serve as the keynote speaker at this year’s memorial service and I reluctantly agreed to do so. I say “reluctantly” because I’d delivered a keynote at the service before that honored and inducted two close friends many years after their deaths. I remembered how difficult it was at that service to get the words out as they circulated through the emotional depths of my brain and heart.

One of those honored was one of my best friends and partners. She was killed in a MedEvac helicopter crash on the first nighttime on-scene mission in 1982. The other was my father’s longtime EMS partner, who was hit by a car and killed while crossing a dark highway to reach a psych patient who jumped from an overpass and sustained minor injuries.

I remember thinking how wonderful (and important) it was for these two young, dedicated people to be recognized and memorialized years after they’d been killed in the prime of their lives and perhaps forgotten because of the lack of a permanent EMS memorial. I also knew that if I was still grieving after such a long passage of time, so too were the families and friends of the other inductees.

So, when asked to speak at this year’s memorial service, the first to be held at its new, permanent site in Colorado Springs, I felt it was not only an honor to be asked, but I also wanted to help recognize the momentous occasion. I was naive and thought I’d be more emotionally prepared to get through my remarks this year. But, after reading the reasons why and how each of the 26 inductees died, reflecting on how very young many of them were and meeting their family members, it was a daunting task.

It was my hope that my speech (available on JEMS.com) would help heal the emotional wounds of the surviving spouses, children, parents, friends and co-workers in attendance. However, although the National EMS Memorial Service organization raises funds and provides lodging for many of the families, their financial resources are limited, and this year, nine of the 26 families were unable to attend the ceremony due to their inability to pay the necessary travel expenses. In their absence, a member of the EMS honor guard accepted their commemorate medals, roses and American flags at the Saturday evening memorial service.

As I sat and observed the ceremony, I couldn’t help but feel that the EMS community needs to band together to provide the necessary sponsorship funds to enable all the families to attend this important weekend to memorialize their loved ones.

It would be a wonderful show of support if EMS agencies and organizations throughout the country contacted the National EMS Memorial Service committee and offered to sponsor a relative to attend next year’s service.

It would also be a nice gesture for agencies sponsoring family members–and agencies from states affected by line-of-duty deaths in 2010–to send service representatives and/or honor guard members to the 2011 memorial service to show support and ensure that the families and friends have all the assistance they need to heal their emotional wounds. JEMS

Show your agency’s support by contacting the National EMS Memorial Service Committee at 877/230-3147, or e-mail them at info@nemsms.org.