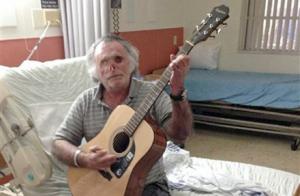 MIAMI (AP) – A homeless man whose face was mostly chewed off in a bizarre attack last year appeared Tuesday to be mostly at peace with his disfigurement, strumming a guitar, making jokes and thanking people for their donations to help pay for his care.

Ronald Poppo doesn’t like to leave his hospital room, though, and he won’t allow anyone to visit him, other than his doctors and nurses. “My face,” he says.

Poppo lost his left eye, his nose and most of the surrounding skin when a naked man attacked him for no reason alongside a Miami highway a year ago.

In a video posted online Tuesday by the hospital caring for him, his left eye socket is a hollow shadow, his blinded right eye is covered by a skin graft and his nose is reduced to just the nostrils. Still, Poppo joked with his nurses and, though he wears a baseball cap, leaves his face uncovered to address the camera.

“People in my predicament need to be helped out, and I’m sure there’s other people also that have the same type of predicament. I thank the outpouring of people in the community, I’ll always be grateful for that,” Poppo said in the brief video, which was shot recently.

He spent nearly a month in the hospital after the attack, before moving to a long-term care facility. His doctors at Jackson Memorial Hospital and the University of Miami Miller School of Medicine praised Poppo for his resilience and said he’s satisfied with the surgeries and skin grafts that have closed his wounds.

Poppo could still use his own tissues or prosthetics to replace his nose or eye, but he is not interested in more facial reconstruction.

“There’s still work that can be done, but he’s more than happy with how he is now, and he’s quite grateful,” said Dr. Wrood Kassira, a plastic surgeon.

A facial transplant wouldn’t be necessary, since Poppo didn’t lose any functions other than his vision.

“To put him through a lifetime of immunosuppression is not something he nor us think is in his best interest,” Kassira said.

“To tell you the truth, I don’t feel like going back to this thing again,” she said. “I’m just trying to recover from what happened.”

“The only thing that he always tells me is that, ‘I’m sure that that man had a bad day that day,'” Sigue said.

Poppo, 66, still requires daily medical care for his wounds, and he’s working with occupational therapists and specialists from the Miami Lighthouse for the Blind to learn how to adjust to his blindness. He can dress himself and is learning again to play the guitar, an instrument he had not picked up for 40 years.

He’s gained 50 pounds, and though his caretakers would like to see him exercise more, he so far refuses to leave the facility unless he’s going to the hospital to see his doctors, said Patricia Copalko, a certified nursing assistant at the medical center.

He also hasn’t allowed any visitors to see him, other than his doctors, nurses and therapists. Sigue said Poppo doesn’t answer the telephone in his room and hasn’t wanted to talk with relatives other than a sister, who calls the nurse’s cellphone to get through.

“He doesn’t wander out of his room very often,” Copalko said, adding, “He needs to get out and he has refused. But also, I get it. He says, ‘My face.'”

Poppo’s caretakers describe him as a charming, cooperative patient who enjoys listening to Miami Heat basketball games on the radio. He can stay at the medical center indefinitely. His care is covered by Medicaid, and a Jackson Memorial Foundation fund has raised $100,000 for his medical expenses.